The Prime Minister of Japan (内閣総理大臣code: ja is deprecated , Naikaku-sōri-daijin, or Shushō (首相code: ja is deprecated )) is the head of government of Japan and the commander-in-chief of the Japanese Armed Forces. The Prime Minister is appointed by the Emperor of Japan after being designated by the National Diet and must enjoy the confidence of the House of Representatives to remain in office. He is the Chairman of the Cabinet and other Ministers of State serve at the pleasure of the Prime Minister. The literal translation of the Japanese name for the office is Minister for the Comprehensive Administration of (or the Presidency over) the Cabinet.

The current Prime Minister is Yoshihide Suga since 16 September 2020.

Before the adoption of the Meiji Constitution, Japan had in practice no written constitution. Originally, a Chinese-inspired legal system known as ritsuryō was enacted in the late Asuka period and early Nara period. It described a government based on an elaborate and rational meritocratic bureaucracy, serving, in theory, under the ultimate authority of the Emperor; although in practice, real power was often held elsewhere, such as in the hands of the Fujiwara clan, who intermarried with the Imperial Family in the Heian period, or by the ruling shōgun. Theoretically, the last ritsuryō code, the Yōrō Code enacted in 752, was still in force at the time of the Meiji Restoration.

Under this system, the Daijō-daijin (太政大臣code: ja is deprecated , Chancellor of the Realm) was the head of the Daijō-kan (Department of State), the highest organ of Japan's pre-modern Imperial government during the Heian period and until briefly under the Meiji Constitution with the appointment of Sanjō Sanetomi in 1871. The office was replaced in 1885 with the appointment of Itō Hirobumi to the new position of Prime Minister, four years before the enactment of the Meiji Constitution, which mentions neither the Cabinet nor the position of Prime Minister explicitly. It took its current form with the adoption of the Constitution of Japan in 1947.

The Prime Minister is designated by both houses of the Diet, before the conduct of any other business. For that purpose, each conducts a ballot under the run-off system. If the two houses choose different individuals, then a joint committee of both houses is appointed to agree on a common candidate. Ultimately, however, if the two houses do not agree within ten days, the decision of the House of Representatives is deemed to be that of the Diet. Therefore, the House of Representatives can theoretically ensure the appointment of any Prime Minister it wants. The candidate is then presented with his or her commission, and formally appointed to office by the Emperor.

In most other constitutional monarchies, the monarch is nominal chief executive, while being bound by convention to act on the advice of the cabinet. In contrast, the Constitution of Japan explicitly vests executive power in the Cabinet, of which the Prime Minister is the leader. His signature is required for all laws and Cabinet orders. While most ministers in parliamentary democracies have some freedom of action within the bounds of cabinet collective responsibility, the Japanese Cabinet is effectively an extension of the Prime Minister's authority. 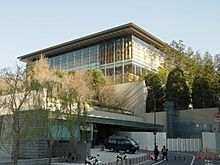 Located near the Diet building, the Office of the Prime Minister of Japan is called the Kantei (官邸). The original Kantei served from 1929 until 2002, when a new building was inaugurated to serve as the current Kantei. The old Kantei was then converted into the Official Residence, or Kōtei (公邸). The Kōtei lies to the southwest of the Kantei, and is linked by a walkway.

All content from Kiddle encyclopedia articles (including the article images and facts) can be freely used under Attribution-ShareAlike license, unless stated otherwise. Cite this article:
Prime Minister of Japan Facts for Kids. Kiddle Encyclopedia.