Junichiro Koizumi (born January 8, 1942) is a Japanese politician, who was the 56th Prime Minister of Japan from 2001 to 2006. He retired from politics when his term in parliament ended in 2009, and is the sixth longest serving PM in Japanese history.

Widely seen as a individualist leader of the Liberal Democratic Party (LDP), he became known as an economic reformer, focusing on Japan's government debt and the privatization of its postal service. In 2005, Koizumi led the LDP to win one of the largest parliamentary majorities in modern Japanese history.

Koizumi also attracted international attention through his deployment of the Japan Self-Defense Forces to Iraq, and through his visits to Yasukuni Shrine that fueled diplomatic tensions with neighboring China and South Korea. He is a member of the Nippon Kaigi nationalist organization.

Although Koizumi maintained a low profile for several years after he leaving office, and returned to national attention in 2013 as an advocate for abandoning nuclear power in Japan, in the wake of March 2011 Fukushima nuclear disaster, which contrasted with the pro-nuclear views espoused by the LDP governments both during and after Koizumi's term in office. 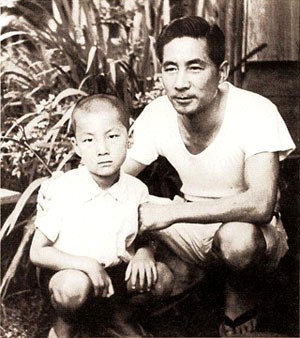 Koizumi is a third-generation politician of the Koizumi family. His father, Jun'ya Koizumi, was director general of the Japan Defense Agency (now Minister of Defense) and a member of the House of Representatives. His grandfather, Koizumi Matajirō, called "Tattoo Minister" because of the big tattoo on his body, and the leader of Koizumi Gumi in Kanagawa (a big group of yakuza), was Minister of Posts and Telecommunications under Prime Ministers Hamaguchi and Wakatsuki and an early advocate of postal privatization.

Born in Yokosuka, Kanagawa on January 8, 1942, Koizumi was educated at Yokosuka High School. He graduated with a Bachelor of Economics degree from Keio University. He attended University College London before returning to Japan in August 1969 upon the death of his father.

In the general elections of December 1972, Koizumi was elected as a member of the Lower House for the Kanagawa 11th district. He joined Fukuda's faction within the LDP. Since then, he has been re-elected ten times. 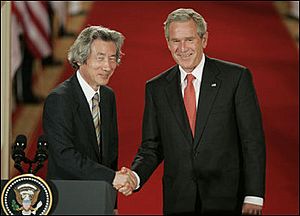 Koizumi was at certain points in his tenure an extremely popular leader. Most people know him very well due to his trademark wavy grey hair. His outspoken nature and colourful past contributed to that; his nicknames included "Lionheart", due to his hair style and fierce spirit, and "Maverick". During his time in office, the Japanese public referred to him as Jun-chan (the suffix "chan" in the Japanese language is used as a term of familiarity, typically between children, "Jun" is a contraction of Junichiro). In June 2001, he enjoyed an approval rating of 85 percent. Koizumi was re-elected in 2003 and his popularity surged as the economy recovered. 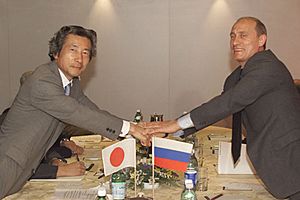 Koizumi remained in the administrations of Abe and Yasuo Fukuda, but announced his retirement from politics on September 25, 2008. He retained his Diet seat until the next general election, when his son Shinjiro was elected into the same seat representing the Kanagawa 11th district in 2009.

Since leaving office as prime minister, Koizumi has not granted a single request for an interview or television appearance, although he has given speeches and had private interactions with journalists. 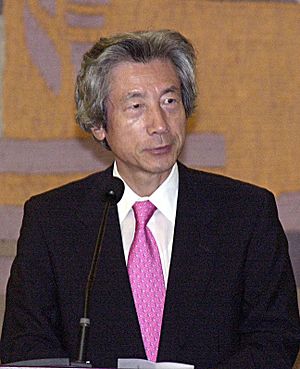 Koizumi lives in Yokosuka, Kanagawa. He married 21-year-old university student Kayoko Miyamoto in 1978. The couple had been formally introduced to each other as potential spouses, a common practice known as omiai. The wedding ceremony at the Tokyo Prince Hotel was attended by about 2,500 people, including Takeo Fukuda (then Prime Minister), and featured a wedding cake shaped like the National Diet Building. The marriage ended in divorce in 1982. After this divorce, Koizumi never married again.

Koizumi had custody of two of his three sons: Kōtarō Koizumi and Shinjirō Koizumi. Shinjiro is the representative for Kanagawa's 11th district, a position his father has also filled.

Koizumi is a fan of Richard Wagner and has released a CD of his favorite pieces by contemporary Italian composer Ennio Morricone. He is also a fan of the heavy metal band X Japan, with the LDP having even used their song "Forever Love" in television commercials in 2001. It was also reported that he was influential in getting the museum honoring X Japan's deceased guitarist Hide made. 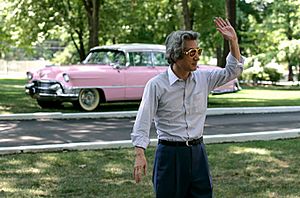 Koizumi is also a noted fan of Elvis Presley, with whom he shares a birthday (January 8). In 2001 he released a collection of his favorite Presley songs on CD, with his comments about each song. His brother is Senior Advisor of the Tokyo Elvis Presley Fan Club. Koizumi and his brother helped finance a statue of Presley in Tokyo's Harajuku district. On June 30, 2006, Koizumi visited Presley's estate, Graceland, accompanied by U.S. President George W. Bush, and First Lady Laura Bush. After arriving in Memphis aboard Air Force One, they headed to Graceland. While there, Koizumi briefly sang a few bars of his favourite Presley tunes, whilst warmly impersonating Presley, and wearing Presley's trademark oversized golden sunglasses. 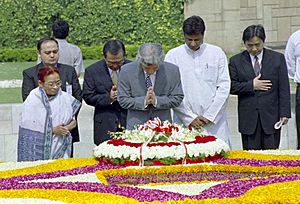 Koizumi also appreciates Finnish composer Jean Sibelius. On September 8, 2006, he and Finnish Prime Minister Matti Vanhanen visited the Sibelius' home, where Koizumi showed respect to the late composer with a moment of silence. He owns reproductions of the manuscripts of all seven symphonies by Sibelius.

In 2009, Koizumi made a voice acting appearance in an Ultra Series feature film, Mega Monster Battle: Ultra Galaxy Legend The Movie, playing the voice of Ultraman King. Koizumi said he took on the role at the urging of his son Shinjiro. His political career is imitated in a seinen manga, Mudazumo Naki Kaikaku, which re-interprets his life as a mahjong master.

He has been compared many times to American actor Richard Gere, because of their similar hair style. In 2005, he used this as a boost for his falling popularity, by staging an "unexpected ballroom dance performance" as in the movie "Shall We Dance?" in which Gere starred.

All content from Kiddle encyclopedia articles (including the article images and facts) can be freely used under Attribution-ShareAlike license, unless stated otherwise. Cite this article:
Junichiro Koizumi Facts for Kids. Kiddle Encyclopedia.