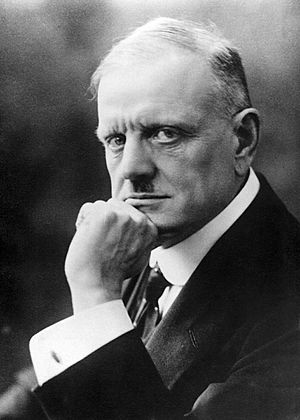 Jean Sibelius (born Hämeenlinna (Tavastehus) 8 December 1865; died Järvenpää, 20 September 1957) was a Finnish composer. He is one of the most famous people from Finland and one of the greatest composers of symphonies of all times. He was born at a time when Russia had a lot of power in Finland and the Finnish people were trying hard to keep their own culture and their independence. This nationalism can be heard in a lot of his music, especially some of the choral music. After 1928 he composed very little. He lived in retirement in his home in the Finnish countryside.

Jean was born 100 km north of the Finnish capital Helsinki. His family spoke Swedish at home, but when he was eleven he went to a Finnish-speaking school. He learned to play the violin and wanted to be a soloist. He loved reading the Kalevala which was a long epic poem about the old Finnish legends. He also loved the Swedish-speaking poets who wrote poems about nature.

In 1885 he went to Helsinki to study law but he soon gave up law and concentrated on his violin studies and composition. He went to Berlin to continue his music studies.

He went back to Finland in 1891. He earned money by teaching. He wrote a big work for orchestra and singers called Kullervo . The words were in Finnish, the story was from the poem Kalevala. This work made him famous. Between 1899 and 1924 Sibelius composed the 7 symphonies which made him famous worldwide. 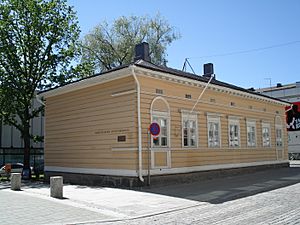 In 1892 he married Aino Järnefelt. They had a house built in Järvenpää. Apart from a few short periods in Helsinki he spent the rest of his life there. The house is now a Sibelius museum.

He continued to travel and visited England several times and the United States in 1914 where he was very popular. After the war he continued to write more symphonies as well as some short, light pieces. The last great work that he wrote was the tone-poem Tapiola in 1926. Sibelius's music today is extremely popular. His music has also been an influence on recent composers.

All content from Kiddle encyclopedia articles (including the article images and facts) can be freely used under Attribution-ShareAlike license, unless stated otherwise. Cite this article:
Jean Sibelius Facts for Kids. Kiddle Encyclopedia.