The Winter War (30 November 1939 - 13 March 1940) was a conflict fought between the Soviet Union and Finland. It began when the Soviet Union tried to invade Finland soon after the Invasion of Poland. The Soviet military forces expected a victory over Finland in a few weeks, because the Soviet army had many more tanks and planes than the Finnish army.

However, the Finnish forces resisted both better and longer than expected. One reason the Finnish forces did better is because they had good winter clothes and they wore white coats which camouflaged them in the snow. As well, the Finnish soldiers moved around on skis, which made it easy for them to sneak up on the Soviet soldiers. The Soviet army did not have good winter clothes, and they wore dark green coats, which made them easy to see in the snow.

The defeated Finns had to give up 11% of their country. They tried to get it back in the Continuation War. 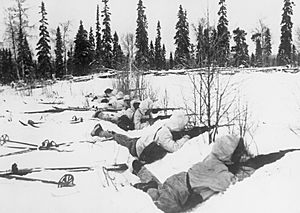 All content from Kiddle encyclopedia articles (including the article images and facts) can be freely used under Attribution-ShareAlike license, unless stated otherwise. Cite this article:
Winter War Facts for Kids. Kiddle Encyclopedia.