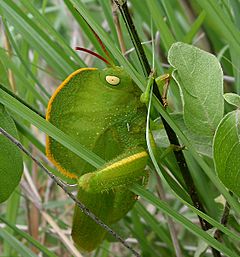 Hooded grasshopper (Teratodus monticollis) is camouflaged in both shape and colour 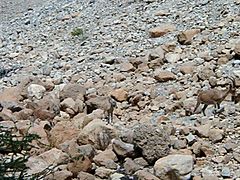 Camouflaged Ibex in the Israeli desert 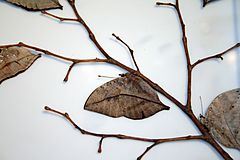 Kallima inachus, the Indian leaf butterfly Shows the leaf-like appearance of the underside of the wing, visible when wings are closed. This is typical of the whole genus. 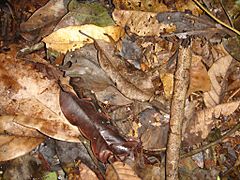 Really exceptional camouflaged frog,
almost invisible (facing right, on the upper left of the nearly-vertical stick on the rightmost third of the photo). Brazil 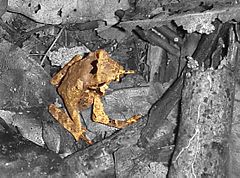 Frog in above photo highlighted 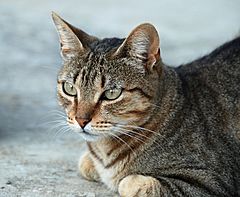 Typical tabby cat is dark striped on its back, head and paws, and white on its belly. That is countershading, a key means of camouflage. 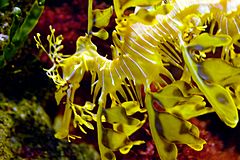 Camouflage is a visual disguise. Without it, an animal would be recognised easily. If the natural colour of an animal makes it look like its surroundings, that is camouflage. A tiger's stripes in the long grass, and the battledress of a modern soldier are examples.

Camouflage is a form of deception. The word camouflage comes from the French word camoufler, which means "to disguise".

In nature, most animals blend into their environment or conceal their shape. They are very hard to see. This way they survive, and if they survive, then they can reproduce. There are exceptions: animals which are dangerous to eat (e.g. wasps) advertise with warning colouration.

Prey animals hide from predators. Predators must search for prey without being seen. Natural camouflage is one way to do this: an animal can blend in with its surroundings. Another way is for the animal to disguise itself as something harmless.

Some camouflaged animals also copy movements in nature, e.g., of a leaf blowing in the wind. Other animals attach natural materials to their body for concealment. A few animals change color in changing environments. Seasonally: (many Arctic animals, such as the arctic fox, or arctic hare). Or quickly, like the chameleon and the cuttlefish. Some herd animals, like zebra, have a pattern which makes it difficult for the predator when they are running.

Mimicry is a special kind of camouflage, where an animal or plant looks like another, usually one which is unpleasant to eat or dangerous.

Most animals are dark on top and light underneath. With light coming from the sky, this countershading makes them less visible. That this is the correct explanation is proved by cases where the animal lives upside down. A famous example is the Nile catfish, which swims belly uppermost. In this case, the belly is dark, and the back is light in colour.p43

Transparent or partly transparent animals are common in the pelagic layer of the sea. These are the layers into which light penetrates. The effect of transparency or silvering works is better under water than above it. This is because the amount of light which penetrates is less and less as the depth increases. Also, the proportion of the light reflected is much less under water (0.001–0.6%) than in air (2–5%).

All content from Kiddle encyclopedia articles (including the article images and facts) can be freely used under Attribution-ShareAlike license, unless stated otherwise. Cite this article:
Camouflage Facts for Kids. Kiddle Encyclopedia.