The glass frog (or glassfrog) is the common name for the frogs of the amphibian family Centrolenidae. Most glass frogs are a lime green color. For some glass frogs the skin on the stomach area is transparent. The insides, including the heart, liver, and gastrointestinal tract can be seen through the skin. This is the reason for the common name.

Glass frogs are generally small, ranging from 1.9 to 7.6 centimetres (0.75 to 2.99 in) in length. The frog is known to eat its own young. They are green in color over most of their bodies.

The skin along the lower surface of the body is translucent (you can see through it). Translucent frogs were less visible, and were attacked by birds significantly less often

Glass frogs are similar in appearance to some green frogs of the genus Eleutherodactylus and to some tree frogs of the family Hylidae. Hylid tree frogs have eyes that face to the side, whilst those of glass frogs face forward.

These frogs live from southern Mexico to Panama. They are through the Andes from Venezuela and the island of Tobago to Bolivia. Some species are in the Amazon and Orinoco River basins, the Guiana Shield region, southeastern Brazil, and northern Argentina.

Glass frogs are mostly arboreal. They live along rivers and streams during the breeding season. Many live in montane cloud forests of Central and South America. Some species also live in Amazon and Chocóan rainforest and semi-deciduous forests.

The eggs are usually put on the leaves of trees or shrubs. The leaves hang over the running water of mountain streams, creeks, and small rivers. One species leaves its eggs over stones close to waterfalls. After they hatch, the tadpoles fall into the waters below. The tadpoles are long, with powerful tails and low fins, suited for fast flowing water. Outside of the breeding season some species live in the canopy. 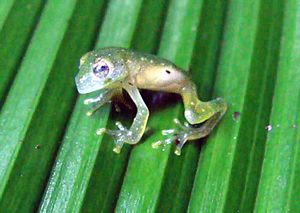 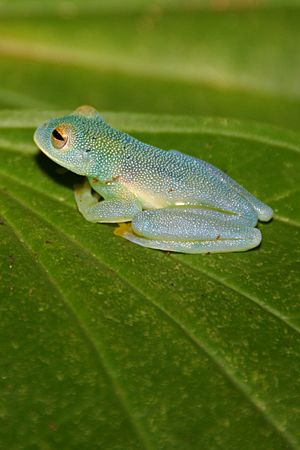 All content from Kiddle encyclopedia articles (including the article images and facts) can be freely used under Attribution-ShareAlike license, unless stated otherwise. Cite this article:
Glass frog Facts for Kids. Kiddle Encyclopedia.