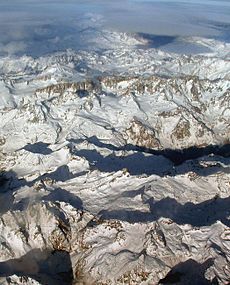 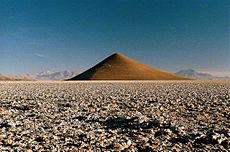 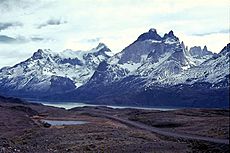 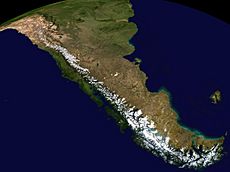 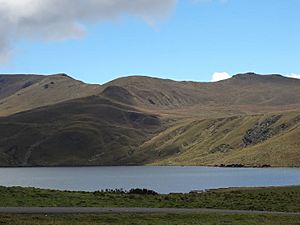 The Andes are a mountain range along the western coast of South America.

They stretch over 7,000 km / 4,400 miles from the south of Argentina and Chile to the north of Colombia. They are also found in Peru, Bolivia and Ecuador.

The Amazon river system has its sources in the eastern flanks of the Andes.

Aconcagua, the highest peak, rises to 6,962 m (22,841 ft) above sea level. The top of Mount Chimborazo in the Ecuadorean Andes is the point on the Earth's surface most distant from its center. Mount Chimborazo is an inactive volcano in Ecuador, which last erupted over a thousand years ago. 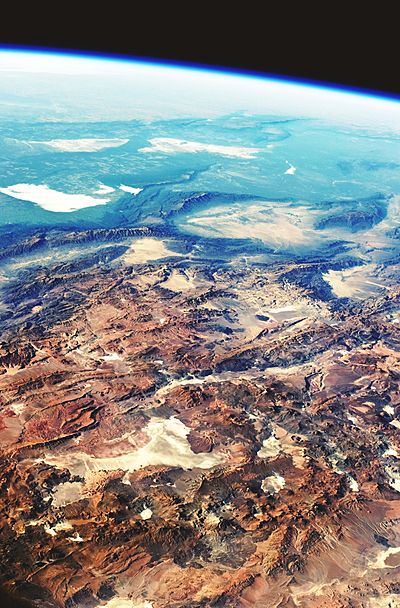 The high plains (3000–5000 m) of the Andes Mountains, the Puna, are in the foreground. A line of young volcanoes faces the much lower Atacama Desert (1000–2000 m elevation).
Several salt-crusted dry lakes are basins between thrust faults in the Puna. Salar de Arizaro (foreground) is the largest of the dry lakes in this view.
Near the centre, the two zones, the Puna and the Sierras Pampeanas, make a striking contrast. The Sierras Pampeanas mountains are lower and have fewer young volcanoes
The colour changes reflects the major climatic regions: the deserts of the Atacama and Puna versus the grassy plains of central Argentina, where rainfall supports the lush prairie of the pampas 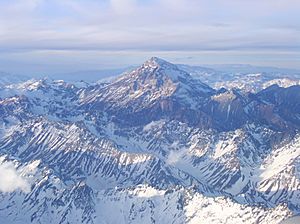 The Andes has three sections:

The northern part has two parallel ranges. They are the Cordillera Occidental (western) and the Cordillera Oriental (eastern). The term cordillera comes from the Spanish word meaning 'rope'.

In Colombia, north to the border with Ecuador, the Andes split in three parallel ranges, western, central and eastern.

In the north the Sierra Nevada de Santa Marta (Snowy Mountain Range of Saint Martha) is an isolated mountain range apart from the Andes chain that runs through Colombia. Reaching an altitude of 5,700 metres above sea level just 42 km from the Caribbean coast, the Sierra Nevada is the world's highest coastal range.

The western range of the eastern Cordillia Oriental is the only one which reaches Colombia .

The Andes range is about 200 km (124 mi) wide throughout its length, except in Bolivia where it is 640 km (398 mi) wide. The islands of the Dutch Caribbean Aruba, Bonaire, and Curaçao, which lie in the Caribbean Sea off the coast of Venezuela, represent the submerged tops of the northern edge of the Andes range.

The Andes are a Mesozoic–Tertiary orogenic belt of mountains along the Pacific Ring of Fire.

The Andes are the result of plate tectonics processes, caused by the subduction of oceanic crust beneath the South American continental plate. South America, like North America, has been moving west since the Cretaceous period.

The formation of the modern Andes began with the events of the Triassic and Jurassic when Pangea begun to break up and several rifts developed. It was during the Cretaceous period that the Andes began to take their present form, by the uplifting, faulting and folding of sedimentary and metamorphic rock of the ancient cratons to the east. The rise of the Andes has not been constant and different regions have had different degrees of tectonic stress, uplift, and weathering. 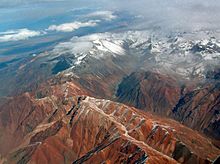 The Andes of Chile and Argentina can be put in two climatic and glaciological zones; the Dry Andes and the Wet Andes.

Rainforests used to hold much of the northern Andes but are now reduced, especially in the Chocó and inter-Andean valleys of Colombia. Farming, deforestation, illegal crops, and population growth has done this.

A direct opposite of the humid Andean slopes are the mostly dry Andean slopes in most of western Peru, Chile and Argentina. That area, and many Interandean Valles, normally have deciduous woodland, shrub and xeric vegetation, up to the mostly lifeless Atacama Desert.

About 30,000 species of vascular plants live in the Andes. About half of those are endemic to the region: it is a hotspot. The small tree Cinchona pubescens is a source of quinine used to treat malaria. It is found widely in the Andes as far south as Bolivia. Other important crops that came from the Andes are tobacco and potatoes.

The high-altitude Polylepis forests and woodlands are found in the Andes of Colombia, Ecuador, Peru, Bolivia and Chile. These trees are called Queñua, Yagual and other names. They grow at altitudes of 4,500 m (14,760 ft) above sea level. It is still unclear if the patchy distribution of these forests and woodlands is natural, or the result of clearing which began during the Incan time. Regardless, in modern times the clearance has had a faster pace, and the trees are now highly endangered. Some think as little as 10% of the original woodland is still here. 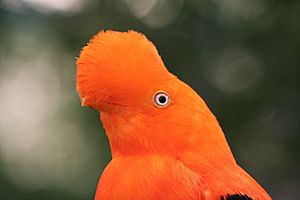 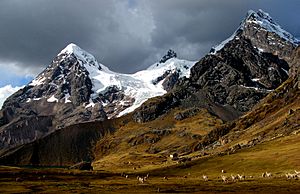 Herds of llamas (alpacas) on the mountain Ausangate hillside

The Vicuña and Guanaco can be found living in the Altiplano, while the closely related domesticated Llama and Alpaca are commonly kept by locals as pack animals and for their meat and wool. The nocturnal chinchillas, two threatened members of the rodent order, live in the Andes' alpine regions. The Andean Condor, the largest bird of its kind in the Western Hemisphere, lives throughout much of the Andes but mostly in very low numbers. Other animals found in the mostly open habitats of the high Andes are the huemul, cougar, and foxes in the genus Pseudalopex. And for birds, some species of tinamous (they are members of the genus Nothoprocta), are the Andean Goose, Giant Coot, flamingos (mainly associated with hypersaline lakes), Lesser Rhea, Andean Flicker, Diademed Sandpiper-plover, miners, sierra-finches and diuca-finches.

All content from Kiddle encyclopedia articles (including the article images and facts) can be freely used under Attribution-ShareAlike license, unless stated otherwise. Cite this article:
Andes Facts for Kids. Kiddle Encyclopedia.