There was a lahar after an eruption in 1985. About 23,000 people died when the lahar covered the Armero, making this the most deadly lahar in the history of the world. People who live near the volcano call it "the Sleeping Lion", because it was dormant or sleeping for nearly 150 years before the Armero lahar.

Nevado del Ruiz is a broad, icy stratovolcano that covers more than 200 kilometres (124 mi). Three major edifices, composed of andesitic and dacitic lavas and andesitic pyroclastics, have built up since the beginning of the Pleistocene. The modern cone consists of a wide cluster of lava domes produced within the summit caldera of an ancient Ruiz cum. The 1–kilometer wide, 240–meter deep Arenas crater currently occupies the summit. The prominent La Olleta pyroclastic cone is on the volcano's southwest flank and may also have been active in historical times. The mountain's flanks are lined by the steep headwalls of massive landslides. Melting of its summit icecap during historical eruptions, which date back to the 16th century, has resulted in devastating lahars, including the famous eruption in 1985 that was the world's deadliest.

In 1595, a lahar flowed down a the valleys of the River Guali and the River Lagunillas, killing 636 people. In 1845, another massive lahar flooded the upper valley of the River Lagunillas, killing over 1000 people. It continued for 70 kilometers downstream before spreading across a plain in the lower valley floor. It is believed both of these formed from melting of the snow and ice that cover the summit, as did the original eruption. 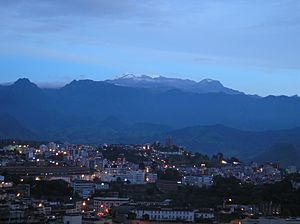 Nevado del Ruiz was very active in the three months before it erupted. An Italian volcanological mission analyzed gas samples from the fumaroles along the Arenas crater floor and proved them to be a mixture of carbon dioxide and sulfur dioxide, indicating a direct magmatic release into surface environment. A very high lahar risk was stressed in the mission's report delivered on October 22, 1985 and various simple preparedness techniques were proposed to local authorities.

During the following "quiet" period in October, the hydrothermal component of the vapor discharge steadily increased. The gases were super-saturated with elemental sulfur; their thermodynamic equilibration temperatures can range from 200 to 600° Celsius. Gases and water from fumaroles and thermal springs on the flanks of the volcano are likely to be produced from a two-phase vapor-brine envelope adjoining the eruptive system within the volcano. The chemistry of the fumarole discharges is compatible with the comparison of an eruptive mechanism involving the build-up of pressure in an extensive vapor zone by gas released from a stagnant, already extensively degassed body of magmatic material at depth. Production of such a residual gas over extended periods may account for the large amount of sulfur dioxide (SO2) being released from the volcano in relation to the small amount of ejected solids.

The destruction wrought by the 1985 eruption was partially due to the fact that scientists vacillated over whether or not to evacuate the area. Nevertheless, a group of scientists informed them that they faced eminent and almost certain death. The people in Armero assumed that because the volcano had not erupted in 100 years, it had no reason to erupt so abruptly. Scientists later looked back to the hours before the eruption and noticed that several long period earthquakes had occurred. Long-period earthquakes are those which start out strong and then die down very slowly. Volcanologist Bernard Chouet said that these earthquakes occurred in the final hours before an eruption. According to Chouet, "the volcano was screaming 'I'm about to explode'," but scientists at the time doubted his theory. 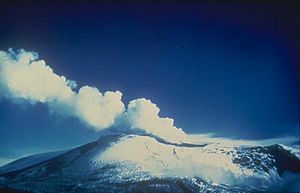 Before the eruption in 1985 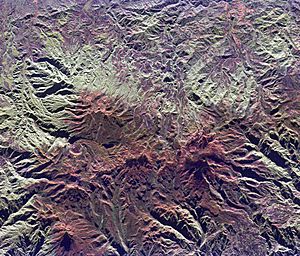 On November 13, 1985, at 9:08 pm, Nevado del Ruiz erupted; ejecting dacitic tephra more than 30 kilometers into the atmosphere. The amount of magma erupted from the volcano was 3% of that from Mount St. Helens in 1980. The eruption reached Volcanic Explosivity Index 3. The material ejected was described by scientists as "unusually rich in sulfur dioxide".

Pyroclastic flows melted ice and snow at the summit, forming 4 thick lahars that rushed down several river valleys. As most lahars do, the mudflows began as flows of water, sand, and gravel, and mixed with clay along the way. The lahars were up to 50 meters thick and six feet deep and traveled more than 100 kilometers.

The lahars destroyed many houses and towns. The town of Armero was completely covered by debris, killing approximately 21,000 people (three-fourths of the population), as well as affecting 13 other villages. The eruption caused an estimated 23,000 deaths, 5,000 injuries, and destroyed more than 5,000 homes. This was the second deadliest volcanic disaster in the 20th century, ousted only by the 1902 eruption of Mount Pelee, and the fourth deadliest eruption in recorded history. In addition, it was the deadliest lahar in recorded history, and Colombia's worst natural disaster.

The disaster gained some major international notoriety due in part to a photograph taken by photographer Frank Fournier, of a young girl named Omayra Sánchez who was trapped beneath rubble for three days before she died. In response to the eruption, the USGS Volcano Crisis Assistance Team was formed in 1986, and the Volcano Disaster Assistance Program. 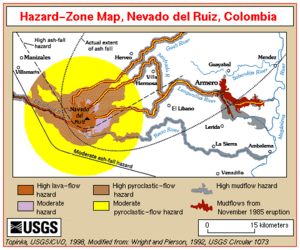 The eruption cost Colombia 7.7 billion dollars, about 20% of the country’s GNP for the year. A lack of preparation contributed to the high death toll. Armero had been built directly on old mudflows and authorities ignored a hazard-zone map which showed the potential damage to the town if lahars were to avalanche down the mountain. Habitants were also told to stay inside and avoid the falling ash, not thinking the mudflows would bury them. Dr. Stanley Williams of Louisiana University said that following the eruption, "With the possible exception of Mount St. Helens in the state of Washington, no other volcano in the Western Hemisphere is being watched so elaborately."

In April 2008, the Nevado del Huila volcano erupted, and thousands were evacuated. Volcanologists were worried that this could be another "Nevado del Ruiz". Hundreds of these eruptions have had huge evacuation numbers for similar reasons.

Survivors who fled to other towns in the area were gradually housed in new government schemes. Armero was not rebuilt because the old lahar traces were discovered, and Colombian government declared the site "holy ground" so that no one would ever suffer again like Armero.

Now a new system can detect lahars, giving people more warning to evacuate before they happen. The system involves the use of Acoustic Flow Monitors (AFM) which analyze ground shaking that could result in a lahar. These AFMs are placed in the volcano and warn officials if there is a high amount of shaking. These devices were tested on Mount Rainier in the United States.

The glaciers of Nevado del Ruiz were composed gradually over hundreds of years. Due to global warming, the glaciers are starting to melt. Since Ruiz gained instant fame after its devastating eruption in 1985, scientists and government officials in Colombia are afraid the glaciers might melt completely.

The stratovolcano lays within the Pacific Ring of Fire, a area of the earth's crust where the land is unstable. It encircles the Pacific Ocean, and houses some of the world's most active volcanoes. The volcano is the northernmost of several Colombian stratovolcanoes in the Andean Volcanic Belt of western South America. The Andean volcanic belt was produced by the eastward subduction of the oceanic Nazca plate beneath the South American continental plate. Normally, these type of stratovolcanoes generate explosive Plinian eruptions with associated pyroclastic flows that can melt snow and glaciers near the summit, thus producing devastating lahars.

The volcano is part of the Ruiz-Tolima volcanic massif (or Cordillera Central), a group of five different icy stratovolcanoes.

All content from Kiddle encyclopedia articles (including the article images and facts) can be freely used under Attribution-ShareAlike license, unless stated otherwise. Cite this article:
Nevado del Ruiz Facts for Kids. Kiddle Encyclopedia.