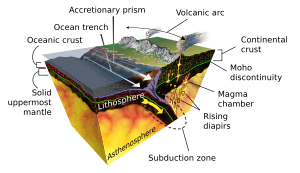 A volcanic arc is a chain of volcanic islands or mountains located near the edge of continents that are formed as the result of tectonic plate subduction. Subduction causes these arcs by creating magma as one tectonic plate is pushed beneath another into the asthenosphere. The magma bubbles its way up to the surface through the crust, erupting onto the surface and forming volcanoes.

Contrary to popular belief, melted oceanic plate is probably not the source of the melt that erupts along a volcanic arc. A subducting plate carries with it a lot of sediment and altered basalt, both of which are rich in water and other volatiles. As the plate gets deeper and deeper, these volatiles are released and migrate upwards. They cause the melting point of the upper mantle rock (that is wedged between the two plates) to drop and magma is formed. It is this magma derived from the asthenosphere and enriched in volatiles from the subducting plate (which is also probably contaminated a little bit by the overlying crust) that erupts in an arc volcano.

There are two types of volcanic arcs: oceanic (island) and continental. The Cascade Mountain Range in western North America is an example of a continental volcanic arc. An example of an island arc is the Aleutian Islands, a chain of islands that stretches nearly 2,500 km from the Alaskan Peninsula to the Near Islands. The arc contains approximately 80 major volcanic centers, nearly half of which have been active in historic times.

All content from Kiddle encyclopedia articles (including the article images and facts) can be freely used under Attribution-ShareAlike license, unless stated otherwise. Cite this article:
Volcanic arc Facts for Kids. Kiddle Encyclopedia.