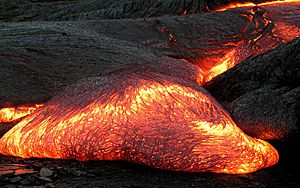 Lava flow on Hawaii. Lava is the extrusive equivalent of magma.

In volcanology, magma is melted rock that is under the ground. There are many types of magma. One is called felsic magma. Felsic magma is thick and has lots of a mineral called silica. It mostly makes light-coloured rocks. Another type is called mafic magma, which is runny and has less silica. It usually makes dark-coloured rocks. A third type is intermediate magma. It is like both the other types.

When magma becomes solid it's usually by cooling slowly, far below the surface. This makes "plutonic" rocks such as granite. When magma comes out from the ground in a volcano and it is still melted, it is called lava. Lava cools more quickly, and forms other kinds of rock such as basalt.

Environments of magma formation and compositions are commonly correlated. Environments include subduction zones, continental rift zones, mid-ocean ridges and hotspots. Despite being found in such widespread locales, the bulk of the Earth's crust and mantle is not molten. Except for the liquid outer core, most of the Earth takes the form of a rheid, a form of solid that can move or deform under pressure. Magma, as liquid, typically forms in high-temperature, low-pressure environments within several kilometers of the Earth's surface.

After formation, magma compositions may be changed by fractional crystallization, contamination, or magma mixing. Rock formed of solidified magma is called igneous rock.

While the study of magma has historically relied on observing magma in the form of lava outflows, magma has been encountered in situ three times during geothermal drilling projects—twice in Iceland (see Magma usage for energy production below), and once in Hawaii.

Magma develops within the mantle or crust when the temperature-pressure conditions favor the molten state. Magma rises toward the Earth's surface when it is less dense than the surrounding rock and when a structural zone allows movement. Magma develops or collects in areas called magma chambers. Magma can remain in a chamber until it cools and crystallizes forming igneous rock, it erupts as a volcano, or moves into another magma chamber.

There are two known processes by which magma changes: by volcanic eruption (to become lava), or by crystallization within the crust or mantle to form a pluton. In both cases most of the magma eventually cools and forms igneous rocks.

When magma cools it begins to form solid mineral phases. Some of these settle at the bottom of the magma chamber forming cumulates that might form mafic layered intrusions. Magma that cools slowly within a magma chamber usually ends up forming bodies of plutonic rocks such as gabbro, diorite and granite, depending upon the composition of the magma. Alternatively, if the magma is erupted it forms volcanic rocks such as basalt, andesite and rhyolite (the extrusive equivalents of gabbro, diorite and granite, respectively).

All content from Kiddle encyclopedia articles (including the article images and facts) can be freely used under Attribution-ShareAlike license, unless stated otherwise. Cite this article:
Magma Facts for Kids. Kiddle Encyclopedia.