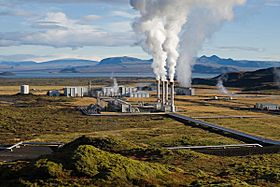 Steam rising from the Nesjavellir Geothermal Power Station in Iceland 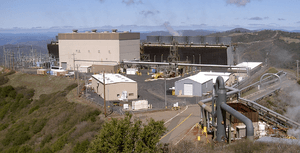 A power plant at The Geysers 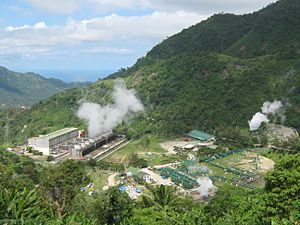 Geothermal power station in the Philippines 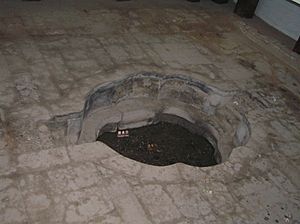 The oldest known pool fed by a hot spring, built in the Qin dynasty in the 3rd century BCE.

Geothermal energy (from the Greek roots geo, meaning earth, and from thermos, meaning heat) is energy made by heat inside the Earth's crust.

Although the Sun does heat the surface of the Earth, the heat from inside the Earth is not caused by the Sun. The geothermal energy of the Earth's crust comes 20% from the original formation of the planet, and 80% from the radioactive decay of minerals. The Earth is hottest at its core and, from the core to the surface, the temperature gets gradually cooler.

Resources of geothermal energy range from the shallow ground to hot water and hot rock found a few miles or kilometers beneath the Earth's surface, and down even deeper to the extremely high temperatures of molten rock called magma. It has been used for bathing from Paleolithic times, but is now better known for making electricity.

Geothermal energy escapes as hot water at many hot springs or as steam at geysers.

All over the world, geothermal energy was used to make about 10 gigawatts of electricity in the year 2007, about 0.3% of the electricity used around the world. When used to generate electricity, geothermal power plants typically offer constant output.

Almost everywhere, the ground 10 feet (3m) below the Earth's surface maintains a nearly constant temperature between 50° and 60 °F (10° and 16 °C). Geothermal heat pumps can tap into this resource to heat and cool buildings. A geothermal heat pump system consists of a heat pump, an air delivery system (ductwork), and a heat exchanger - a system of pipes buried in the shallow ground near the building.

Geothermal energy is also used directly for district heating, or in other heating and cooling applications. Buildings in Iceland are heated in this way from the country's many geothermal sites.

Hot water near the surface of Earth can be used directly for heat. Direct-use applications include heating buildings, growing plants in greenhouses, drying crops, heating water at fish farms, and several industrial processes such as pasteurizing milk.

Power plants and thermal applications of geothermal energy are mature technologies, whereas enhanced geothermal systems (EGS) projects are a new type of application.

In the United States, most geothermal reservoirs of hot water are in the western states, Alaska, and Hawaii. Wells can be drilled into underground reservoirs for the generation of electricity. Some geothermal power plants use the steam from a reservoir to power a turbine / generator, while others use the hot water to boil a working fluid that vaporizes and then turns a turbine.

Hot dry rock resources occur at depths of 3 to 5 miles (5–8 km) everywhere beneath the Earth's surface and at lesser depths in certain areas. Access to these resources involves injecting cold water down one well, circulating it through hot fractured rocks, and drawing off the heated water from another well. Currently, nobody uses this method commercially. Existing technology also does not yet allow recovery of heat directly from magma, the very deep and most powerful resource of geothermal energy.

All content from Kiddle encyclopedia articles (including the article images and facts) can be freely used under Attribution-ShareAlike license, unless stated otherwise. Cite this article:
Geothermal energy Facts for Kids. Kiddle Encyclopedia.