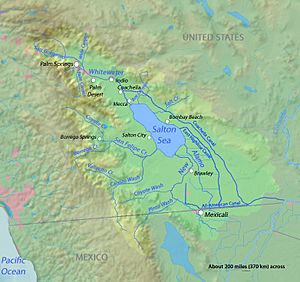 The Salton Sea is a shallow, saline, endorheic rift lake located directly on the San Andreas Fault, predominantly in the U.S. state of California's Imperial and Coachella valleys.

The lake occupies the lowest elevations of the Salton Sink in the Colorado Desert of Imperial and Riverside counties in Southern California. Its surface is 236.0 ft (71.9 m) below sea level as of January 2018. The deepest point of the sea is 5 ft (1.5 m) higher than the lowest point of Death Valley. The sea is fed by the New, Whitewater, and Alamo rivers, as well as agricultural runoff, drainage systems, and creeks.

Over millions of years, the Colorado River has flowed into the Imperial Valley and deposited soil (creating fertile farmland), building up the terrain and constantly changing the course of the river. For thousands of years, the river has alternately flowed into and out of the valley, alternately creating a freshwater lake, an increasingly saline lake, and a dry desert basin, depending on river flows and the balance between inflow and evaporative loss. The cycle of filling has been about every 400–500 years and has repeated many times. The latest natural cycle occurred around 1600–1700 as remembered by Native Americans who talked with the first European settlers. Fish traps still exist at many locations, and the Native Americans evidently moved the traps depending upon the cycle.

The most recent inflow of water from the now heavily controlled Colorado River was accidentally created by the engineers of the California Development Company in 1905. In an effort to provide water into the Imperial Valley for farming, beginning in 1900, an irrigation canal was dug from the Colorado River to the old Alamo River channel, directing the water west and then north near Mexicali. The headgates and canals suffered silt buildup, so a series of cuts were made in the bank of the Colorado River to further increase the water flow. The resulting outflow overwhelmed the third intake, "Mexican Cut", near Yuma, Arizona, and the river flowed into the Salton Basin for two years, filling what was then a dry lake bed and creating the modern sea, before repairs were completed.

While it varies in dimensions and area with fluctuations in agricultural runoff and rainfall, the Salton Sea is about 15 by 35 miles (24 by 56 km). With an estimated surface area of 343 square miles (890 km2) or 350 square miles (910 km2), the Salton Sea is the largest lake in California by surface area. The average annual inflow is less than 1.2 million acre⋅ft (1.5 km3), which is enough to maintain a maximum depth of 43 feet (13 m) and a total volume of about 6 million acre⋅ft (7.4 km3). However, due to changes in water apportionments agreed upon for the Colorado River under the Quantification Settlement Agreement of 2003, the surface area of the sea is expected to decrease by 60% between 2013 and 2021.

All content from Kiddle encyclopedia articles (including the article images and facts) can be freely used under Attribution-ShareAlike license, unless stated otherwise. Cite this article:
Salton Sea Facts for Kids. Kiddle Encyclopedia.