Salton City is a census-designated place (CDP) in Imperial County, California. The population was 3,763 at the 2010 census, up from 978 in 2000. It is the largest Imperial County development on the Salton coast. It is part of the El Centro, California Metropolitan Statistical Area. Although planned and developed as a large resort community with an extensive road, water, sewer and power grid capable of supporting 40,000 residents on 12,000 residential lots, demand for property in Salton City fell drastically short of the planners' expectations. As of the 2010 census, 81% of the surveyed lots in Salton City remain undeveloped, and 38% of the habitable residences in Salton City are unoccupied, giving it an eerie, mostly-abandoned appearance and leading some to call it a modern ghost town.

The town was developed in the 1950s and established in 1958 primarily by M. Penn Phillips and the Holly Sugar Corporation as a resort community on the Salton Sea, a saline, endorheic rift lake located directly on the San Andreas Fault, yet very little development was achieved due to its isolation and lack of local employment opportunities.

In the 1970s, most of the buildings constructed along the shoreline, including the city's marina were abandoned due to rising sea elevation. In the 1980s, the Imperial Irrigation District took proactive water conservation measures to reduce the flow of unused canal water into the Salton Sea. Throughout the 1980s and 1990s, as salinity and suspected pollution levels in the Salton Sea increased, the attraction of the Salton Sea as a recreational destination diminished. Most of the original tourist related structures fell during this time, including the Truckhaven Cafe, the Salton Bay Yacht Club hotel and restaurant, and the Holly House motel and restaurant (later renamed Desser House and then the Sundowner).

In the 2000s, development in Salton City began to rise as a result of the escalating California housing market. Cheap land and housing costs, improvements to Highway 86, and a casino opened by Torres-Martinez Desert Cahuilla Indians attracted new residents.

According to the United States Census Bureau, the CDP has a total area of 21.1 square miles (55 km2), all land. This area makes Salton City the largest city or town in terms of land area in the Imperial Valley.

Salton City is located on relatively flat ground. Several washes flow from the mountains to the west creating small gorges where any flowing run-off will drain into the Salton Sea. The vegetation of the CDP consists of mostly sparse desert shrub; however, in developed areas a variety of palm trees as well as other deciduous trees survive. Salton City is positioned between the eastern slope of the Peninsular Ranges and the western coast of the Salton Sea.

To the north of the CDP are Salton Sea Beach and Desert Shores. Salton City is approximately 50 miles from the Imperial County seat of El Centro and 110 and 115 miles respectively from the coastal San Diego County cities of Oceanside and San Diego.

This area has a large amount of sunshine year round due to its stable descending air and high pressure. According to the Köppen Climate Classification system, Salton City has a mild desert climate, abbreviated BWn on climate maps. However, Salton City experiences its own microclimate due to the proximity of the warm lake waters. Humidity is significantly higher along the shore during the warmer months, from May through September. Its climate can mimic a Subtropical Climate at times, with exceptionally high dewpoints for an arid desert, but this typically happens for only a part of the day, or a few days in a row at the most. Once winds prevail from the northwest, the climate is similar to other areas in Imperial County, which are not along the sea. 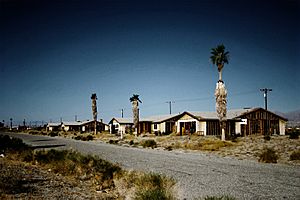 Four unfinished and abandoned houses in Salton City, CA on the west shore of Salton Sea. 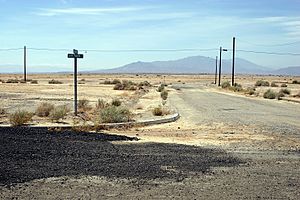 Part of the road system laid out in Salton City that was never used.

There were 416 households out of which 21.4% had children under the age of 18 living with them, 51.4% were married couples living together, 8.2% had a female householder with no husband present, and 35.8% were non-families. 30.0% of all households were made up of individuals and 19.7% had someone living alone who was 65 years of age or older. The average household size was 2.4 and the average family size was 2.9.

Salton City was featured in an episode of the television series Life After People.

Salton City was mentioned in the Los Angeles episode of the Travel Channel series Off Limits.

Salton City is a track on the Hot Snakes' 2000 album Automatic Midnight.

The 1996 book Into the Wild by Jon Krakauer mentions Salton City as a place where Chris McCandless stopped in his travels.

J. A. Jance's novel Trial by Fire is partly set in Salton City.

In Sue Grafton's 1982 novel, A is for Alibi, The main character, Kinsey Millhone, travels to "Salton Sea" (presumably Salton City) for an interview with Greg Fife who is living in a trailer by the sea. The area is described by the main character as being beautiful in its emptiness. A conversation between Kinsey and Greg ensues about whether or not the sea is made up of ocean water. This enables Greg to open up and give Kinsey some much needed answers.

All content from Kiddle encyclopedia articles (including the article images and facts) can be freely used under Attribution-ShareAlike license, unless stated otherwise. Cite this article:
Salton City, California Facts for Kids. Kiddle Encyclopedia.