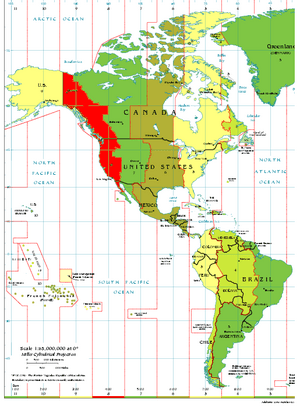 The Pacific Time Zone is one of the time zones in the world. It is based on the mean solar time of the 105th meridian west of the Greenwich Observatory. Normally, its time is 8 hours before Coordinated Universal Time. The time zone is in the United States, Canada and Mexico. The biggest city in the zone is Los Angeles, California; its metropolitan area is the largest in the zone. During Daylight Savings Time, the Pacific Time Zone is represented by UTC−7.

Places that are in Pacific Time Zone

All of Yukon, Tungsten, Northwest Territories and Most of British Columbia

It includes the entire states of Washington and California

It also contains most of Oregon and Nevada

All content from Kiddle encyclopedia articles (including the article images and facts) can be freely used under Attribution-ShareAlike license, unless stated otherwise. Cite this article:
Pacific Time Zone Facts for Kids. Kiddle Encyclopedia.