Kids Encyclopedia Facts
Not to be confused with West Wendover, Nevada; for other uses, see Wendover (disambiguation).

Wendover is a city on the western edge of Tooele County, Utah, United States. The population was 1,400 at the 2010 census.

The town was established in 1908 as a station stop on the Western Pacific Railroad, then under construction. 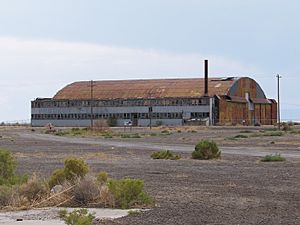 During World War II, the nearby Wendover Army Air Field was a training base for bomber pilots, including the crew of the Enola Gay. The Enola Gay was stationed here until June 1945.

Recently the Utah Department of Transportation completed an interchange at Aria Boulevard on Interstate 80.[1] Investment is also underway to restore the Wendover Airfield, which is currently managed by Tooele County. Meanwhile, lodging has increased along Wendover Boulevard in recent years.

Movements to unite Wendover with West Wendover, which is located across the border in Nevada and allows gambling operations, have taken place but require the approval of the U.S. Congress and the Nevada and Utah legislatures. The U.S. House of Representatives passed a resolution permitting Wendover to leave Utah and join Nevada in 2002, but the bill was blocked in the U.S. Senate and did not become law.

According to the United States Census Bureau, the city has a total area of 6.4 square miles (16.7 km²), all of it land.

According to the Köppen Climate Classification system, Wendover has a semi-arid climate, abbreviated "BSk" on climate maps.

There were 432 households, out of which 54.9% had children under the age of 18 living with them, 56.9% were married couples living together, 11.6% had a female householder with no husband present, and 24.1% were non-families. Of all households, 16.7% were made up of individuals, and 3.5% had someone living alone who was 65 years of age or older. The average household size was 3.56 and the average family size was 4.10.

All content from Kiddle encyclopedia articles (including the article images and facts) can be freely used under Attribution-ShareAlike license, unless stated otherwise. Cite this article:
Wendover, Utah Facts for Kids. Kiddle Encyclopedia.