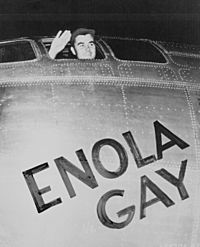 Tibbets waving from the Enola Gay to photographers before taking off on the mission to drop the atmoic bomb on Hiroshima.

The Enola Gay is a B-29 Superfortress Bomber. This plane is famous for dropping the first atomic bomb (named Little Boy) over the Japanese city of Hiroshima during World War II. The Bomber is named after its Pilot, Paul Tibbets' mother Enola Gay Tibbets. The plane was used from 18 May 1945 to 24 July 1946, after which it was stored at Suitland, Maryland.

All content from Kiddle encyclopedia articles (including the article images and facts) can be freely used under Attribution-ShareAlike license, unless stated otherwise. Cite this article:
Enola Gay Facts for Kids. Kiddle Encyclopedia.