"Little Boy" was the codename for the type of atomic bomb dropped on the Japanese city of Hiroshima on 6 August 1945 during World War II. It was the first nuclear weapon used in warfare. The bomb was dropped by the Boeing B-29 Superfortress Enola Gay piloted by Colonel Paul W. Tibbets, Jr., commander of the 509th Composite Group of the United States Army Air Forces and Captain Robert A. Lewis. It exploded with an energy of approximately 15 kilotons of TNT (63 TJ) and caused widespread death and destruction throughout the city. The Hiroshima bombing was the second man-made nuclear explosion in history, after the Trinity test.

Little Boy was developed by Lieutenant Commander Francis Birch's group at the Manhattan Project's Los Alamos Laboratory during World War II, a reworking of their unsuccessful Thin Man nuclear bomb. Like Thin Man, it was a gun-type fission weapon, but it derived its explosive power from the nuclear fission of uranium-235, whereas Thin Man was based on fission of plutonium-239. Fission was accomplished by shooting a hollow cylinder of enriched uranium (the "bullet") onto a solid cylinder of the same material (the "target") by means of a charge of nitrocellulose propellant powder. It contained 64 kg (141 lb) of enriched uranium, although less than a kilogram underwent nuclear fission. Its components were fabricated at three different plants so that no one would have a copy of the complete design.

After the war ended, it was not expected that the inefficient Little Boy design would ever again be required, and many plans and diagrams were destroyed. However, by mid-1946, the Hanford Site reactors began suffering badly from the Wigner effect, the dislocation of atoms in a solid caused by neutron radiation, and plutonium became scarce, so six Little Boy assemblies were produced at Sandia Base. The Navy Bureau of Ordnance built another 25 Little Boy assemblies in 1947 for use by the Lockheed P2V Neptune nuclear strike aircraft which could be launched from the Midway-class aircraft carriers. All the Little Boy units were withdrawn from service by the end of January 1951. 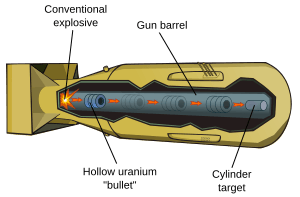 The "gun" assembly method. When the hollow uranium projectile was driven onto the target cylinder, a nuclear explosion resulted.

The Little Boy was 120 inches (300 cm) in length, 28 inches (71 cm) in diameter and weighed approximately 9,700 pounds (4,400 kg). The design used the gun method to explosively force a hollow sub-critical mass of enriched uranium and a solid target cylinder together into a super-critical mass, initiating a nuclear chain reaction. This was accomplished by shooting one piece of the uranium onto the other by means of four cylindrical silk bags of cordite powder.

Inside the weapon, the uranium-235 material was divided into two parts, following the gun principle: the "projectile" and the "target". The projectile was a hollow cylinder with 60% of the total mass (38.5 kg (85 lb)). It consisted of a stack of nine uranium rings, each 6.25-inch (159 mm) in diameter with a 4-inch (100 mm) bore in the center, and a total length of 7 inches (180 mm), pressed together into the front end of a thin-walled projectile 16.25 inches (413 mm) long. Filling in the remainder of the space behind these rings in the projectile was a tungsten carbide disc with a steel back. At ignition, the projectile slug was pushed 42 inches (1,100 mm) along the 72-inch (1,800 mm) long, 6.5-inch (170 mm) smooth-bore gun barrel. The slug "insert" was a 4 inches (100 mm) cylinder, 7 inches (180 mm) in length with a 1 inch (25 mm) axial hole. The slug comprised 40% of the total fissile mass (25.6 kg or 56 lb). The insert was a stack of six washer-like uranium discs somewhat thicker than the projectile rings that were slid over a 1 inch (25 mm) rod. This rod then extended forward through the tungsten carbide tamper plug, impact-absorbing anvil, and nose plug backstop, eventually protruding out of the front of the bomb casing. This entire target assembly was secured at both ends with locknuts.

When the hollow-front projectile reached the target and slid over the target insert, the assembled super-critical mass of uranium would be completely surrounded by a tamper and neutron reflector of tungsten carbide and steel, both materials having a combined mass of 2,300 kg (5,100 lb). Neutron initiators at the base of the projectile were activated by the impact.

All content from Kiddle encyclopedia articles (including the article images and facts) can be freely used under Attribution-ShareAlike license, unless stated otherwise. Cite this article:
Little Boy Facts for Kids. Kiddle Encyclopedia.