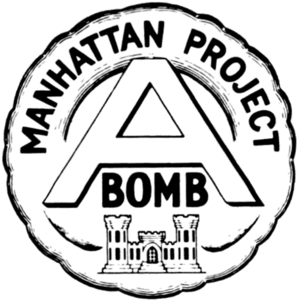 Circular shaped emblem with the words "Manhattan Project" at the top, and a large "A" in the center with the word "bomb" below it, surmounting the US Army Corps of Engineers' castle emblem

The Manhattan Project was the program based in the United States which tried to make the first nuclear weapons. The project went on during World War II, and was run by the U.S. Army. The head of the project was General Leslie R. Groves, who had led the building of the Pentagon. The top scientist on the project was Robert Oppenheimer, a famous physicist. The project cost $2 billion, and created many secret cities and bomb-making factories, such as a laboratory in Los Alamos, New Mexico, a nuclear reactor in Hanford, Washington, and a uranium processing plant in Oak Ridge, Tennessee.

The Manhattan Project had to find solutions to two difficulties. The first difficulty is how to make the special isotopes of uranium (uranium-235) or plutonium. This process is called separation and is very slow. The United States built very big buildings with three different kinds of machine for separation. They made enough fissionable special isotopes for a few nuclear weapons. The second difficulty was how to make a bomb that will produce a big nuclear explosion every time. A weapon with a bad design can make a much smaller nuclear explosion. This is called a "fizzle". In July 1945, the Manhattan Project solved the two difficulties and made the first nuclear explosion. This test of a nuclear weapon was called "Trinity" and was a success.

The Manhattan Project created two nuclear bombs which the United States used against Japan in 1945. 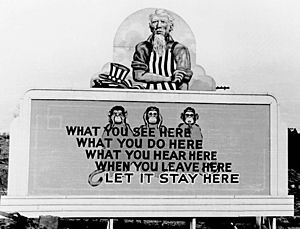 The Manhattan Project operated under a blanket of tight security. This was to prevent the Axis countries, especially Nazi Germany, from accelerating their own nuclear projects or undertaking covert operations against the project. The possibility of sabotage was always present. At times, people suspected sabotage when equipment failed. While there were some problems believed to be the result of careless or disgruntled employees, there were no confirmed instances of Axis-instigated sabotage. However, on 10 March 1945, a Japanese fire balloon struck a power line, and the resulting power surge caused the three reactors at Hanford to be temporarily shut down.

Maintaining security was difficult because so many people worked on the project. A special Counter Intelligence Corps detachment handled the project's security issues. By 1943, it was clear that the Soviet Union was trying to penetrate the project. Lieutenant Colonel Boris T. Pash, the head of the Counter Intelligence Branch of the Western Defense Command, investigated suspected Soviet espionage at the Radiation Laboratory in Berkeley. Oppenheimer informed Pash that he had been approached by a fellow professor at Berkeley, Haakon Chevalier, about passing information to the Soviet Union.

The most successful Soviet spy was Klaus Fuchs. Fuchs was a member of the British Mission who played an important part at Los Alamos. The 1950 revelation of Fuchs' espionage activities damaged the United States' nuclear cooperation with Britain and Canada. Subsequently, other instances of espionage were uncovered, leading to the arrest of Harry Gold, David Greenglass and Ethel and Julius Rosenberg. Other spies like George Koval remained unknown for decades. People will never know the value of the espionage. One reason was that the Soviet atomic bomb project was held back by a shortage of uranium ore. The consensus is that espionage saved the Soviets one or two years of effort.

All content from Kiddle encyclopedia articles (including the article images and facts) can be freely used under Attribution-ShareAlike license, unless stated otherwise. Cite this article:
Manhattan Project Facts for Kids. Kiddle Encyclopedia.