B Reactor facts for kids

The B Reactor at the Hanford Site, near Richland, Washington, was the first large-scale nuclear reactor ever built. The project was a key part of the Manhattan Project, the United States nuclear weapons development program during World War II. Its purpose was to convert natural Uranium ore into plutonium-239 by the process of neutron activation, as Plutonium is far less complex to process than Uranium itself. The B reactor was fueled with metallic natural uranium, graphite moderated, and water-cooled. It has been designated a U.S. National Historic Landmark since August 19, 2008 and in July 2011 the National Park Service recommended that the B Reactor be included in the Manhattan Project National Historical Park commemorating the Manhattan Project. Visitors can take a tour of the reactor by advance reservation.

The reactor was designed and built by E. I. du Pont de Nemours and Company based on experimental designs tested by Enrico Fermi at the University of Chicago, and tests from the X-10 Graphite Reactor at Oak Ridge National Laboratory. It was designed to operate at 250 megawatts (thermal).

The purpose of the reactor was to breed Plutonium from Uranium ore, as Uranium enrichment is an extremely difficult and complex process, while Plutonium is relatively simple to process. The Y12 Uranium enrichment plant required 14,700 tons of silver for its enrichment calutrons, as well as 22,000 employees and more electrical power than most entire states required at the time. Reactor B required only a few dozen employees and much less exotic materials, which were also required in far smaller amounts. The largest part of the reactor was 1200 tons of Graphite used as a moderator, and its power consumption was vastly smaller, requiring only enough electricity to run the cooling pumps.

The core is surrounded by a thermal shield of cast iron 8 to 10 inches (20 to 25 cm) thick weighing 1,000 short tons (910 t). Masonite and steel plates enclose the thermal shield on its top and sides, forming a biological shield for radiation protection. The bottom of the thermal shield is supported by a 23-foot-thick (7.0 m) concrete pad topped by cast-iron blocks. The graphite composition was selected to moderate the nuclear reaction fueled by 200 short tons (180 t) of uranium slugs approximately 25 mm (1 in) diameter 70 mm (3 in) long (the approximate size of a roll of quarters), sealed in aluminum cans, and loaded into the aluminum tubes.

The reactor was water-cooled, with cooling water pumped from the Hanford Reach of the Columbia River through the aluminum tubes around the uranium slugs at the rate of 75,000 US gal (280,000 L) per minute. The water was discharged into settling basins, then returned to the river after allowing time for the decay of radioactive materials, the settling out of particulate matter and for the water to cool so it could be returned to the Columbia River. Water returning to the river was prohibited from raising the temperature of the river by more than 11 °F. 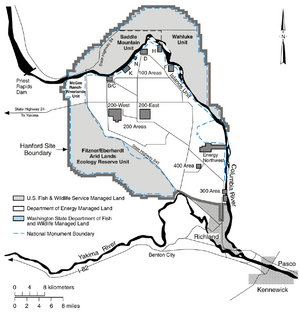 Map of the Hanford site with the B/C reactor site shown at the upper left.

The B Reactor had its first nuclear chain reaction in September, 1944, the D Reactor in December 1944 and the F Reactor in February 1945. The reactor produced plutonium-239 by irradiating uranium-238 with neutrons generated by the nuclear reaction. It was one of three reactors – along with the D and F reactors – built about six miles (10 km) apart on the south bank of the Columbia River. Each reactor had its own auxiliary facilities that included a river pump house, large storage and settling basins, a filtration plant, large motor-driven pumps for delivering water to the face of the pile, and facilities for emergency cooling in case of a power failure.

Emergency shutdown of the reactor, referred to as a SCRAM, was attained either by rapidly fully inserting the vertical safety rods or, as a backup method, by the injection of borated water into the reactor. In January 1952, the borated water system was replaced by a "Ball-3X" system that injected nickel-plated high-boron steel balls into the channels occupied by the vertical safety rods.

The plutonium for the nuclear bomb used in the Trinity test in New Mexico and the Fat Man bomb dropped on Nagasaki, Japan was created in the B reactor. B reactor ran for two decades, and was joined by additional reactors constructed later. The B Reactor was permanently shut down in February 1968. 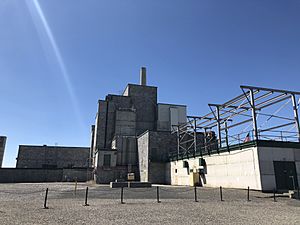 Exterior of the Hanford B Reactor as of 2018 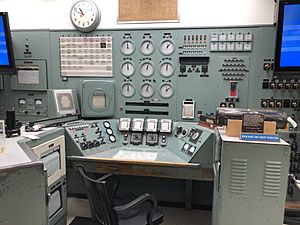 Hanford B Reactor Control Station as of 2018 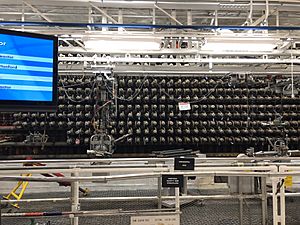 Hanford B Reactor Tubes and Elevator as of 2018

The United States Department of Energy has administered the site since 1977 and offers public tours on set dates during the spring, summer, and fall of the year, as well as special tours for visiting officials.

As of 2014[update] six of the nine production reactors at Hanford were considered to be in "interim safe storage" status, and two more were to receive similar treatment. The exception was the B Reactor, which was given special status for its historical significance.

The K East and K West reactors were built in the 1950s and went into use in 1955. They were shut down in 1970 and 1971, but reused temporarily for storage later. Preliminary plans for interim stabilizing of the K-East and K-West reactors were underway as of January 30, 2018.

The B Reactor was added to the National Register of Historic Places (#92000245) on April 3, 1992. A Record of Decision (ROD) was issued in 1999, and an EPA Action Memorandum in 2001 authorized hazards mitigation in the reactor with the intention of allowing public tours of the reactor. It was named a National Historic Landmark on August 19, 2008.

In December 2014, passage of the 2015 National Defense Authorization Act (NDAA) made the B reactor part of the Manhattan Project National Historical Park, which also includes historic sites at Oak Ridge, Tennessee and Los Alamos, New Mexico. The park was formally established by a Memorandum of Agreement on November 10, 2015, which was signed by the National Park Service and the Department of Energy. Museum development at Hanford may include the B Reactor, Bruggemann's Warehouse, Hanford High School, Pump House, and White Bluffs Bank.

All content from Kiddle encyclopedia articles (including the article images and facts) can be freely used under Attribution-ShareAlike license, unless stated otherwise. Cite this article:
B Reactor Facts for Kids. Kiddle Encyclopedia.