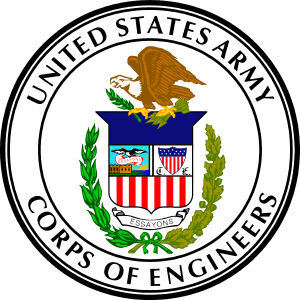 Seal of the US Army Corps of Engineers

The United States Army Corps of Engineers (USACE, also sometimes shortened to CoE) is a U.S. federal agency under the Department of Defense. It is a major Army command made up of some 36,500 civilian and military personnel. Although generally associated with dams, canals and Flood control in the United States, USACE is involved in a wide range of public works throughout the world. The Corps of Engineers provides outdoor recreation opportunities to the public, and provides 24% of U.S. hydropower capacity.

The Corps' mission is to "Deliver vital public and military engineering services; partnering in peace and war to strengthen our Nation’s security, energize the economy and reduce risks from disasters".

Their most visible missions include:

The Corps' vision is "Engineering solutions for our Nation’s toughest challenges". During the American Civil War, the functions of the Corps of Topographical Engineers were merged into the Army Corps of Engineers.

All content from Kiddle encyclopedia articles (including the article images and facts) can be freely used under Attribution-ShareAlike license, unless stated otherwise. Cite this article:
United States Army Corps of Engineers Facts for Kids. Kiddle Encyclopedia.