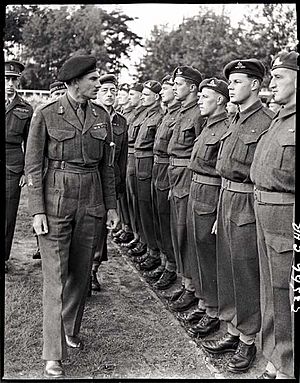 A corps (a word that immigrated from the French language, but originating in the Latin "corpus, corporis" meaning body; plural same as singular) is either a large military unit or formation, an administrative grouping of troops within an army with a common function (such as artillery or signals), or a formed military or semi-military body (such as the United States Marine Corps, the Corps of Royal Marines, the Honourable Corps of Gentlemen at Arms, or the Corps of Commissionaires).

In many armies, a corps refers to a unit of approximately 60,000 men, composed of usually three divisions, and typically commanded by a lieutenant general. During World War I and World War II, due to the large scale of combat, multiple corps were combined into armies which then formed into army groups.

The first corps in the United States Army were legalized during the American Civil War by an Act of Congress on July 17, 1862. As of 2003, the United States Army has four field corps. The structure of a field corps is not permanent; many of the units that it commands are allocated to it as needed. On the battlefield, the field corps is the highest level of the forces that is concerned with actually fighting and winning the war.

The British Army still has a corps headquarters for operational control of forces. I Corps of the British Army of the Rhine was redesignated the Headquarters Allied Command Europe Rapid Reaction Corps in 1994. It is no longer a purely British formation, although the UK is the 'framework nation' and provides most of the staff for the headquarters.

Canada first fielded a corps sized formation in the First World War; the Canadian Corps was unique in that its composition did not change from inception to the war's end, in contrast to British corps in France and Flanders. The Canadian Corps consisted of four Canadian divisions. After the Armistice, the peacetime Canadian militia was nominally organized into corps and divisions but no full time formations larger than a battalion were ever trained or exercised.

The Pre-World War Two Soviet Red Army had Rifle Corps much like in the Western sense—with about three divisions to a Corps. However, after the war started, the recently-purged Soviet senior command structure was apparently unable to handle the formations, and the Armies and Corps were integrated into new, smaller "Armies" and those into fronts. Before and during World War II, however, Soviet armored units were organized into corps

All content from Kiddle encyclopedia articles (including the article images and facts) can be freely used under Attribution-ShareAlike license, unless stated otherwise. Cite this article:
Corps Facts for Kids. Kiddle Encyclopedia.