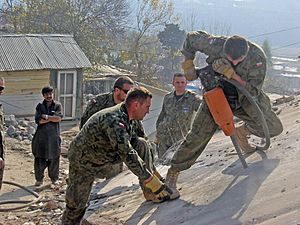 A military engineer uses his skills in construction to build many different structures for warfare. These different structures can be made for either offense or defense. Other jobs include building and taking apart minefields and bridges. In some cases an engineer may have to destroy something that he has built before. This may be to stop the enemy soldiers following them across the river for example. In many armies the military engineers are also called pioneers or sappers.

Today a military engineer that operates during battle is called a combat engineer.

Perhaps the first people who had a special force of military engineering specialists were the Romans. Roman military engineering was very good in its time. So they were able to build a double-wall of fortifications that was thirty miles long in total (both walls together) in just six weeks, when they wanted to encircle a besieged city in Gaul.

The design, construction, and destroying of the works shown would be the task of a military engineer.

All content from Kiddle encyclopedia articles (including the article images and facts) can be freely used under Attribution-ShareAlike license, unless stated otherwise. Cite this article:
Military engineering Facts for Kids. Kiddle Encyclopedia.