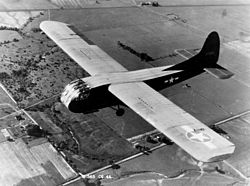 Military gliders (a variation of the common glider) have been used by the military of various countries for carrying troops and heavy equipment into a war zone. They were used mainly during the Second World War. These aircraft with no engines were towed into the air and most of the way to their target by military transport planes. One of the most popular tow aircraft was the C-47 Skytrain or Dakota. They could also be towed by bombers. Military gliders do not soar. Once released from the tow craft near the front lines, they were to land on any convenient open terrain close to their target.

They tried to landed with as little damage as possible to the cargo and crew as possible. But most landing zones (LZ) were far from ideal. The one-way nature of the missions meant that military gliders were treated as being disposable. This is why they were made from common and inexpensive materials such as wood. They were unarmored, fragile, aircraft with crude steering and no brakes. This is why a large number of them crashed on landing. Troops landing by glider were referred to as airborne infantry. Pilots called themselves "tow targets" while the soldiers referred to the gliders as "flying coffins." Casualties for some missions ran as high as 40%.

Gilders had certain advantages, however. Paratroopers, soldiers landing by parachute, were usually spread over a large area. They could easily be separated from other paratroopers and from air-dropped equipment, such as vehicles and anti-tank guns. Gliders, on the other hand, could land troops and equipment precisely at the target landing area. Once released from the tow aircraft, military gliders were silent and difficult for the enemy to identify. Larger gliders were developed to land heavy equipment like anti-tank guns, anti-aircraft guns, small vehicles, such as jeeps, and also light tanks (e.g., the Tetrarch tank). This heavier equipment made glider forces much more capable. During World War II, the United States had about 6,000 trained glider pilots. Some were given a second chance to fly as glider pilots after failing to complete conventional aircraft training. The Soviets also experimented with ways to deliver light tanks by air, including the Antonov A-40, a gliding tank with detachable wings.

By the time of the Korean War, helicopters had largely replaced gliders. Helicopters have the advantage of being able to deliver and extract soldiers to and from the battlefield with more precision. Also, modern advances allow even light tanks to be dropped by parachute. Only special forces use gliders for silent, small-scale insertion today.

All content from Kiddle encyclopedia articles (including the article images and facts) can be freely used under Attribution-ShareAlike license, unless stated otherwise. Cite this article:
Military glider Facts for Kids. Kiddle Encyclopedia.