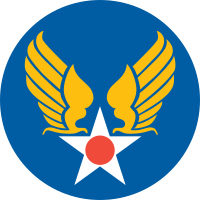 The United States Army Air Forces (USAAF) was the military aviation arm of the United States of America during and immediately after World War II. It was the direct precursor to the United States Air Force, established in 1947. At its peak strength in 1944, the USAAF had over 2.4 million men and women in service, nearly 80,000 aircraft and 783 permanent bases, and operated from more than 2,000 airfields worldwide.

The Air Corps became the Army Air Forces in June 1941 to provide the air arm a greater autonomy in which to expand more efficiently, and to provide a structure for the additional command echelons required by a vastly increased force. Although other nations already had separate air forces independent of the army or navy (such as the British Royal Air Force and the German Luftwaffe), the USAAF remained a part of the United States Army.

All content from Kiddle encyclopedia articles (including the article images and facts) can be freely used under Attribution-ShareAlike license, unless stated otherwise. Cite this article:
United States Army Air Force Facts for Kids. Kiddle Encyclopedia.