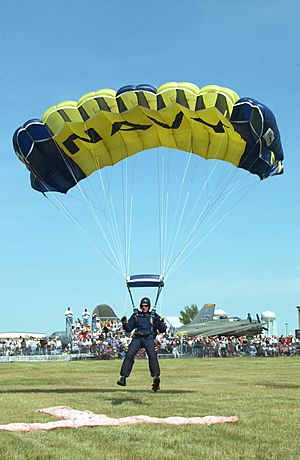 Landing with a modern parachute

This is what happens when the main parachute is released 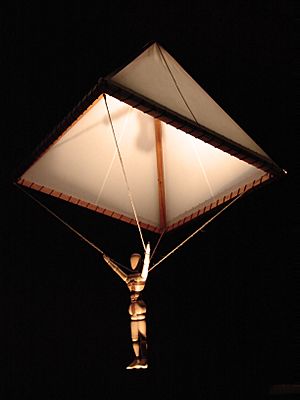 A parachute uses drag to slow something moving in air. It is often an umbrella shaped device on which people or things can float slowly and safely down to the ground from a great height, such as an aircraft.

The word parachute comes from the French words parer meaning to protect and chute meaning fall carefully down making sure you are safe. Drogue parachutes are used to aid horizontal deceleration of a vehicle (a fixed-wing aircraft, or a drag racer), or to provide stability (tandem free-fall, or space shuttle after touchdown).

Parachutes are used in a sport called skydiving. Paratroopers are soldiers who attack by jumping from an airplane.

The word "parachute" comes from "para", meaning "against" or "counter" in Ancient Greek, and "chute", the French word for "fall". In many other languages, the word refers to "falling-screen", such as German Fallschirm. Some modern parachutes are classified as semi-rigid wings, which are maneuverable and can make a controlled descent to break on impact with the ground.

The inventor Leonardo Da Vinci sketched a parachute in his Codex Atlanticus (fol. 381v), in about 1485. Leonardo's canopy was held open by a square wooden frame. The feasibility of Leonardo's pyramidal design was successfully tested in 2000 by the Briton Adrian Nicholas and again in 2008 by another skydiver. According to the historian of technology Lynn White, these conical and pyramidal designs, much more elaborate than early artistic jumps with rigid parasols in Asia, mark "the origin of the parachute as we know it".

The parachute package is called rig. It consists of backpack, harness and canopy. The backpack is the container in which the parachute is stored, and which opens up when the parachute is deployed. The harness is the strapping on which the backpack is attached to the jumper. Modern harnesses have leg straps, vertical (upwards) straps and chest strap which can be tightened snug. The fabric part of the parachute is called canopy. It is attached to the harness by lines, which themselves attach to four straps called risers. The canopy may be round, bell-like, resembling like a jellyfish, or the canopy may be a mattress-like, resembling a wing profile. Most army parachutes are bell parachutes, while most recreational, rescue and professional parachutes are wing parachutes.

Old-fashioned bell parachutes were opened by pulling a rip cord. Modern parachutes do not have rip cords anymore, but the skydiver simply throws a small auxiliary (helper) parachute called pilot chute into air. This small auxiliary chute then pulls the main parachute canopy out of its pod in the backpack and it inflates (fills with air) automatically.

A parachute is carefully folded, or "packed" to ensure that it will open reliably. If a parachute is not packed properly it may result in death since the main parachute might fail to deploy (open and develop) correctly or fully. In the U.S. and many developed countries, emergency and reserve parachutes are packed by "riggers" who must be trained and certified according to legal standards. Sport skydivers are always trained to pack their own primary "main" parachutes. Many skydivers never let anyone else to pack their parachutes because they know the rig is correctly packed when they have done it themselves.

Parachutes can malfunction in several ways. Malfunctions can range from minor problems that can be corrected in-flight and still be landed, to catastrophic malfunctions that require the main parachute to be cut away using a modern 3-ring release system, and the reserve be deployed. Most skydivers also equip themselves with small barometric computers (known as an AAD or automatic activation device like Cypres, FXC or Vigil) that will automatically activate the reserve parachute if the skydiver has not deployed a parachute to reduce his rate of descent by a preset altitude.

All content from Kiddle encyclopedia articles (including the article images and facts) can be freely used under Attribution-ShareAlike license, unless stated otherwise. Cite this article:
Parachute Facts for Kids. Kiddle Encyclopedia.