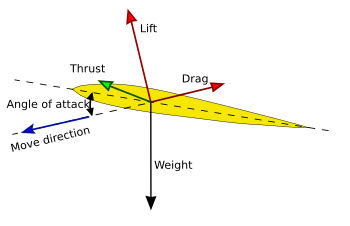 Forces on an aircraft wing

The lift force, lifting force or simply lift is the sum of all the forces on a body that force it to move perpendicular to the direction of flow.

The most common type of lift is that of a wing of an aircraft. But there are many other common uses such as propellers on both aircraft and boats, rotors on helicopters, fan blades, sails on sailboats, and wind turbines.

While the common meaning of the term "lift" suggests an "upwards" action, lift can be in any direction. For instance, for a sail the lift is horizontal, and for the wing on a race car the lift is down.

There are a number of ways of explaining the production of lift; some are more complicated than others, some have been shown to be false. The simplest explanation is that the wing deflects air downward, and the reaction pushes the wing up.

All content from Kiddle encyclopedia articles (including the article images and facts) can be freely used under Attribution-ShareAlike license, unless stated otherwise. Cite this article:
Lift (force) Facts for Kids. Kiddle Encyclopedia.