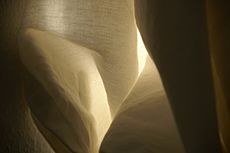 An example of linen cloth.

Linen is a material made from the fibers of the flax plant (Linum usitatissimum). It is mainly used to make cloth, especially for light clothing and table coverings.

The flax plant is one of the plants humans have grown and used. Linen cloth was already made at least 6,000 years ago in Egypt and Mesopotamia. This makes linen one of the oldest fibers and cloths used by humans, besides wool and hemp. Linen and hemp were the most important fiber plants in Europe for a long time. Linen was for example also used to wrap Egyptian mummies.

In recent centuries linen has largely been replaced by cotton and synthetic materials, which are cheaper.

All content from Kiddle encyclopedia articles (including the article images and facts) can be freely used under Attribution-ShareAlike license, unless stated otherwise. Cite this article:
Linen Facts for Kids. Kiddle Encyclopedia.