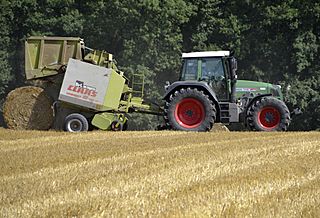 A Claas large round baler

A baler, most often called a hay baler is a piece of farm machinery used to compress a cut and raked crop (such as hay, cotton, flax straw, salt marsh hay, or silage) into compact bales that are easy to handle, transport, and store. Often, bales are configured to dry and preserve some intrinsic (e.g. the nutritional) value of the plants bundled. Several different types of balers are commonly used, each producing a different type of bale – rectangular or cylindrical, of various sizes, bound with twine, strapping, netting, or wire.

Before the 19th century, hay was cut by hand and most typically stored in haystacks using hay forks to rake and gather the scythed grasses into optimal sized heaps — neither too large (promoting conditions that might create spontaneous combustion), nor too small, so much of the pile is susceptible to rotting. These haystacks lifted most of the plant fibers up off the ground, letting air in and water drain out, so the grasses could dry and cure, to retain nutrition for livestock feed at a later time. In the 1860s, mechanical cutting devices were developed; from these came the modern devices including mechanical mowers and balers. In 1872, a reaper that used a knotter device to bundle and bind hay was invented by Charles Withington; this was commercialized in 1874 by Cyrus McCormick. In 1936, Innes invented an automatic baler that tied bales with twine using Appleby-type knotters from a John Deere grain binder; an improved version patented by Ed Nolt in 1939 was more reliable and became commonly used. 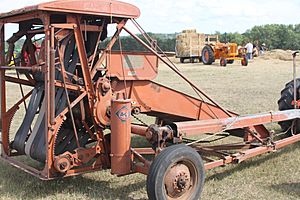 Round baler dumping a fresh bale

The most common type of baler in industrialized countries today is the round baler. It produces cylinder-shaped "round" or "rolled" bales. The design has a "thatched roof" effect that withstands weather well. Grass is rolled up inside the baler using rubberized belts, fixed rollers, or a combination of the two. When the bale reaches a predetermined size, either netting or twine is wrapped around it to hold its shape. The back of the baler swings open, and the bale is discharged. The bales are complete at this stage, but they may also be wrapped in plastic sheeting by a bale wrapper, either to keep hay dry when stored outside or convert damp grass into silage. Variable-chamber large round balers typically produce bales from 48 to 72 inches (120 to 180 cm) in diameter and up to 60 inches (150 cm) in width. The bales can weigh anywhere from 1,100 to 2,200 pounds (500 to 1,000 kg), depending upon size, material, and moisture content. Common modern small round balers (also called "mini round balers" or "roto-balers") produce bales 20 to 22 inches (51 to 56 cm) in diameter and 20.5 to 28 inches (52 to 71 cm) in width, generally weighing from 40 to 55 pounds (18 to 25 kg).

Originally conceived by Ummo Luebben circa 1910, the first round baler did not see production until 1947 when Allis-Chalmers introduced the Roto-Baler. Marketed for the water-shedding and light weight properties of its hay bales, AC had sold nearly 70,000 units by the end of production in 1960. The next major innovation began in 1965 when a graduate student at Iowa State University, Virgil Haverdink, sought out Wesley F. Buchele, a professor of Agricultural Engineering, seeking a research topic for a master thesis. Over the next year Buchele and Haverdink developed a new design for a large round baler, completed and tested in 1966, and thereafter dubbed the Buchele-Haverdink large round baler. The large round bales were about 1.5 meters (5 ft) in diameter, 2 meters (7 ft) long, and they weighed about 270 kilograms (600 lbs) after they dried—about 80 kg/m3 (5 lb/ft3). The design was promoted as a "Whale of a Bale" and Iowa State University now explains the innovative design as follows:

"Farmers were saved from the backbreaking chore of slinging hay bales in the 1960s, when Iowa State agricultural engineering professor Wesley Buchele and a group of student researchers invented a baler that produced large, round bales that could be moved by tractor. The baler has become the predominant forage-handling machine in the United States."

In the summer of 1969, the Australian Econ Fodder Roller baler came out, a design that made a 135 kg (300 lb) ground-rolled bale. In September of that same year, The Hawkbilt Company of Vinton, Iowa, contacted Dr. Buchele about his design, then fabricated a large ground-rolling round baler which baled hay that had been laid out in a windrow, and began manufacturing large round balers in 1970. In 1972, Gary Vermeer of Pella, Iowa, designed and fabricated a round baler after the design of the A-C Roto-Baler, and the Vermeer Company began selling its model 605 - the first modern round baler. The Vermeer design used belts to compact hay into a cylindrical shape as is seen today. In the early 1980s, collaboration between Walterscheid and Vermeer produced the first effective uses of CV joints in balers, and later in other farm machinery. Due to the heavy torque required for such equipment, double Cardan joints are primarily used. Former Walterscheid engineer Martin Brown is credited with "inventing" this use for universal joints.

By 1975, fifteen American and Canadian companies were manufacturing large round balers.

All content from Kiddle encyclopedia articles (including the article images and facts) can be freely used under Attribution-ShareAlike license, unless stated otherwise. Cite this article:
Baler Facts for Kids. Kiddle Encyclopedia.