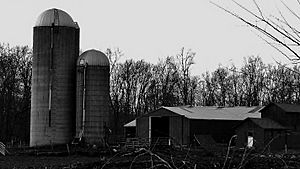 Two Silos beside a barn

A silo is a building that holds silage. Silage is green chopped plants (usually grass or corn stalks) that is kept wet (this is different than hay, which is stored dry). It ferments and can be kept all winter. It makes good food for livestock, particularly dairy cows.

The silo is a fairly recent part of the farmyard. It was first widely used in the late 1800's. They are still used today.

While silage can be stored in many ways, the typical silo is a tall cylinder. It usually has a cone or dome cap on top. There is an opening at the top to put silage in, and doors running down one side to take it out. Originally a farmer would climb the outside of the silo to the top of the silage, go inside, and shovel out the silage. There is typically a chute on the outside, and the silage would fall down the chute, where it could be gathered and fed to the cows. Now there is machinery that does that job.

All content from Kiddle encyclopedia articles (including the article images and facts) can be freely used under Attribution-ShareAlike license, unless stated otherwise. Cite this article:
Silo Facts for Kids. Kiddle Encyclopedia.