Bourke is a town in the north-west of New South Wales, Australia. The administrative centre and largest town in Bourke Shire, Bourke is approximately 800 kilometres (500 mi) north-west of the state capital, Sydney, on the south bank of the Darling River.

The location of the current township of Bourke on a bend in the Darling River is the traditional country of the Ngemba people.

The first white explorer to encounter the river was Charles Sturt in 1828 who named it after New South Wales Governor Ralph Darling. Having struck the region during an intense drought and a low river, Sturt dismissed the area as largely uninhabitable and short of any features necessary for establishing renewable industry on the land. 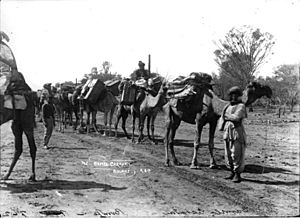 A Camel caravan in Bourke circa 1900

It was not until the mid-1800s following a visit by colonial surveyor and explorer Sir Thomas Mitchell in 1835 that settlement of the area began. Following tensions with the local people Mitchell built a small stockade to protect his men and named it Fort Bourke after then Governor Richard Bourke. This first crude structure became the foundation for a fledgling community with a small number of agricultural and livestock farms established in the region shortly afterwards. The area started to flourish when its location on the Darling River had it recognised as a key trade centre, linking the nearby outback agricultural industries with the east coast trade routes via the Darling River.

Bourke was surveyed for a town in 1869 and soon established itself as the outback trade hub of New South Wales with several transportation industries setting up branches in the town. By the 1880s Bourke would host a Cobb & Co. Coach Terminus, several paddle boat companies running the Darling and a bridge crossing the river that would allow for road transportation into the town and by 1885 Bourke would be accessible by rail, confirming its position as a major inland transport hub. Like many outback Australian townships, Bourke would come to rely on camels for overland transport, and the area supported a large Afghan community that had been imported to drive the teams of camels. A small Afghan mosque that dates back to the 1900s can be found within Bourke cemetery.

As trade moved away from river transport routes, Bourke's hold on the inland trade industry began to relax. Whilst no longer considered a trade centre, Bourke serves instead as a key service centre for the states north western regions. In this semi-arid outback landscape, sheep farming along with some small irrigated cotton crops comprise the primary industry in the area today.

Bourke's traditional owners endured a similar fate to indigenous people across Australia. Dispossessed of their traditional country and in occasional conflict with white settlers, they battled a loss of land and culture and were hit hard by European disease. While the population of the local Ngemba and Barkindji people around the town of Bourke had dwindled by the late 19th century, many continued to live a traditional lifestyle in the region. Others found employment on local stations working with stock and found their skill as trackers in high demand.

A large influx of displaced Aboriginal peoples from other areas in the 1940s saw Bourke's indigenous community grow and led to the establishment of a reserve in 1946 by the Aborigines Protection Board. The majority of indigenous settlers were Wangkumara people from the Tibooburra region.

In 1962 local high jumper Percy Hobson became the first Aboriginal athlete to win a Commonwealth Games gold medal for Australia in Perth. The 5 ft. 10 in. tall Hobson jumped 13 inches above his height to win the event with a leap of 6 ft. 11 inches. While Hobson was urged by athletics administrators ‘not to broadcast his ancestry’, he was celebrated on his return to Bourke and greeted by a brass band playing "Hail the Conquering Hero". Cathy Freeman was the next Aboriginal athlete to claim a Commonwealth Gold in Auckland in 1990. 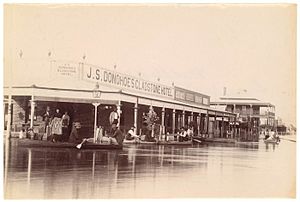 Mitchell Street, Bourke, in "The Wet", a flood that occurred in 1890

Bourke has a hot semi-arid climate with mild amount of rainfall throughout the year. On 4 January 1903, Bourke recorded a maximum temperature of 49.7 °C (121.5 °F), making it tied for the hottest temperature recorded anywhere in New South Wales with Menindee, which is located further to the south, and one of the highest maximums ever to be recorded in Australia.

Bourke has many schools in which preschool children, primary and high school students can receive a good education. The Bourke – Walgett school of Distance education allows children to be schooled at home, from preschool to year 12. 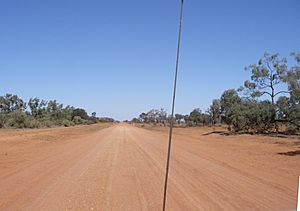 Bourke can be reached by the Mitchell Highway from both the north from Cunnamulla and from the southeast from Nyngan. Brewarrina and Walgett are located on the Kamilaroi Highway that has its western terminus in Bourke. Moree and Goondiwindi, located on the Newell Highway, connect to Bourke via various roads. Cobar via the Kidman Way, is connected from the south.

The town is also served by Bourke Airport (private aircraft only at present) and has Countrylink bus service to other regional centres such as Dubbo. It was formerly the largest inland port in the world for exporting wool on the Darling River. The Bourke court house is unique in inland Australia in that it was originally a maritime court and to this day maintains that distinction. That distinction is evident in the crowns that sits above the finials of the flag poles atop the corner parapets of the building. The countryside around Bourke is used mainly for sheep farming with some irrigated fruit and extensive cotton crops near the river.

Bourke is the original terminus of the Main Western railway line. The railway extension from Byrock opened on 3 September 1885, the station building in now used as an information centre. Passenger services on the line were cancelled in September 1975 with the line closing from Nyngan to Bourke in May 1989, after flooding caused major track damage.

The Tourist Information Centre is located on the Mitchell Highway at The Back 'O Bourke Exhibition Centre. 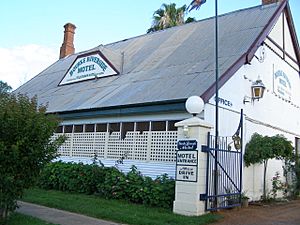 Bourke is considered to represent the edge of the settled agricultural districts and the gateway to the Outback that lies north and west of Bourke. This is reflected in a traditional east coast Australian expression "back o' Bourke", referring to the Outback.

In 1892 a young writer Henry Lawson was sent to Bourke by Bulletin editor J.F. Archibald to get a taste of outback life and to try to curb his heavy drinking. In Lawson's own words "I got £5 and a railway ticket from the Bulletin and went to Bourke. Painted, picked up in a shearing shed and swagged it for six months". The experience was to have a profound effect on the 25-year-old and his encounter with the harsh realities of bush life inspired much of his subsequent work. Lawson would later write "if you know Bourke you know Australia". In 1992 eight poems, written under a pseudonym and published in the Western Herald, were discovered in the Bourke library archives and confirmed to be Lawson's work.

Bush poets Harry 'Breaker' Morant and William Ogilvie also spent time in the Bourke region and based much of their work on the experience.

Fred Hollows, the famous eye surgeon, was buried in Bourke after his death in 1993. Fred Hollows had worked in Bourke in the early 1970s and had asked to be buried there.

The Telegraph Hotel, established in 1888 beside the Darling River, has been restored and now operates as the Riverside Motel.

In 2008, persistently high levels of crime in Bourke led to bans on the sale of alcohol. A U.S.-style justice reinvestment program has also been put in place to combat crime. This holistic program reaches out to at-risk youths, especially Aboriginals, before they might commit serious offenses and be incarcerated. 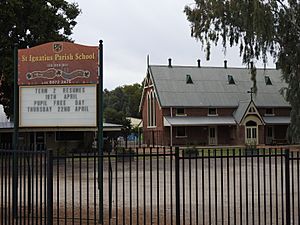 Bourke has many schools for preschool children, primary and high school students. The Bourke–Walgett school of distance education allows children to be schooled at home, from preschool to year 12.

All content from Kiddle encyclopedia articles (including the article images and facts) can be freely used under Attribution-ShareAlike license, unless stated otherwise. Cite this article:
Bourke, New South Wales Facts for Kids. Kiddle Encyclopedia.