Charleville is a town and locality in the Shire of Murweh, Queensland, Australia. In the 2011 census, Charleville had a population of 3,728 people.

Located in south western Queensland, Australia, Charleville is 683 kilometres (424 mi) west of Brisbane (the Queensland capital). It is the largest town and administrative centre of the Shire of Murweh, which covers an area of 43,905 square kilometres. Charleville is situated on the banks of the Warrego River, and is the terminus for the Warrego Highway.

The first European exploration of the area was conducted by Edmund Kennedy in 1847. A hotel was built in 1865, and a town began to grow to service the region. It was situated near Gowrie's Crossing, a permanent waterhole, now on the outskirts of the modern town. Gowrie Station had been established around the crossing along a natural stock route, for the grazing of sheep and cattle. The town was gazetted in 1868 with very wide streets to enable bullock teams of up to 14 pairs to turn with their wagons. It was William Alcock Tully, then government assistant surveyor, who laid out the town's streets. An Irishman, Tully probably named the town after the town of Charleville, County Cork, Ireland. Members of the Roma-based Skinner family established a store in the town in 1872 that became known as the Warrego Stores.

Cobb and Co, the legendary Australian stagecoach company, established a coach building business in the town in 1886, however, the railway arrived in 1888, beginning the long demise of coach transport in the area. Charleville station was the terminus for the Western railway line for more than a decade. Facilities included a locomotive depot, cattle and sheep yards, a 50-ton weighbridge, a booking and telegraph offices, goods shed, stationmaster's house, and guards, enginemen and firemen's cottages.

In 1902 Charleville was the location of an unsuccessful attempt by Clement Lindley Wragge to fire cannons into the clouds in order to break a drought. The cannons used remain on display in Charleville today. 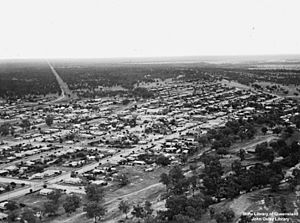 Aerial view of Charleville in 1947

In 1922, Qantas established an airmail service between Charleville and Cloncurry. At the same time, this was Qantas's first regularly scheduled route and the second scheduled air route in Australia.

On 9 October 1924, the Charleville War Memorial was unveiled by Sir Matthew Nathan, the Governor of Queensland.

Charleville was also one of the compulsory stop over/check points during the London to Melbourne MacRobertson Air Race in 1934. The winners of the great race were Tom Campbell Black and C. W. A. Scott. Their triumph was reported in Time magazine as:

"Scott and Black, keeping up their sensational pace, flashed into Charleville, refueled, sped toward the finish where waiting thousands cheered their progress, reported over loudspeakers. With one motor dead, with only two hours sleep since leaving England, the Britons triumphantly set their scarlet torpedo down in Melbourne at 3:34 p.m. In 71 hr. 1 min. 3 sec. – Just under three days – they had flown halfway around the world."

Proximity to the Warrego River has been problematic. In April 1990, major floods hit western Queensland, with Charleville being badly affected. Floodwaters peaked at 8.54 metres, over 1,000 homes were inundated, and almost 3,000 people evacuated. More recently, the district suffered flooding again in 1997, 2008 and March 2010. Flooding also occurred in February 2012.

There is a children's book called The Flood Grungies; it is written by Michelle Sheehan and illustrated by Donna Reynolds. It is about the notorious Charleville floods and features the Cosmos centre, the water tower and other famous landmarks.

Charleville has a warm climate, with maximum temperatures ranging from 35 °C (95 °F) in summer to 20 °C (68 °F) in winter. Rainfall is mild and distributed patchily throughout the year, with a peak in summer. Severe flooding events are usually caused by monsoon troughs and the remnants of tropical cyclones dumping large amounts of rain over the area; however rain normally falls in the form of thunderstorms and light showers after hot summer days. Extremes have ranged from 46.4 °C (115.5 °F) to −5.2 °C (22.6 °F). The highest rainfall total recorded for one month was 316.0 millimetres (12.44 in) in March 2010.

Charleville has several tourist attractions, including a museum of the Royal Flying Doctor Service of Australia, a historical museum, wildlife sanctuary (including a bilby reserve), and the Cosmos Centre.

Charleville has a range of facilities for the community including a golf course (located in May Street), swimming pool, bowling green, speedway, racing course, and the Gowrie sporting oval as well as a public library open to the general public.

The Charleville Golf Course has eighteen sand greens and a licensed clubhouse.

North of the town is VMC, a marine weather transmitter operated by the Bureau of Meteorology. 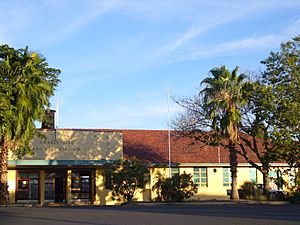 Aviation is served by the Charleville Airport. The Westlander rail passenger service links the town to Brisbane. Charleville would have been the southern end of the Transcontinental railway proposed in the 1880s, connecting to Point Parker on the Gulf of Carpentaria.

Charleville has a number of heritage-listed sites, including:

as well as a number in nearby localities:

All content from Kiddle encyclopedia articles (including the article images and facts) can be freely used under Attribution-ShareAlike license, unless stated otherwise. Cite this article:
Charleville, Queensland Facts for Kids. Kiddle Encyclopedia.