Qantas is the flag carrier airline of Australia, with its headquarters close to Kingsford Smith Airport in Sydney. It is the second oldest continuously operating airline in the world. Qantas is commonly known as the "Flying Kangaroo" because of its logo, which is identified as a white kangaroo on a red right-angle triangle. 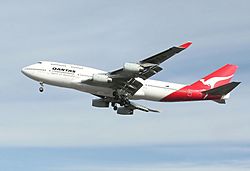 The table below shows how many different types of aircraft Qantas have operating and on order as of February 2015.

All content from Kiddle encyclopedia articles (including the article images and facts) can be freely used under Attribution-ShareAlike license, unless stated otherwise. Cite this article:
Qantas Facts for Kids. Kiddle Encyclopedia.