Cathay Pacific (Chinese: 國泰航空) (Template:Sehk), is the flag carrier of Hong Kong, with its head office and main hub located at Hong Kong International Airport. The airline's operations and subsidiaries have scheduled passenger and cargo services to 180 destinations in 44 countries worldwide including codeshares, and joint ventures. Served with a fleet of wide-body aircraft, consisting of Airbus A330, Airbus A350, and Boeing 777 equipment. Its wholly owned subsidiary, Cathay Dragon, operates to 44 destinations in the Asia-Pacific region from its Hong Kong base. In 2010, Cathay Pacific, together with Dragonair (rebranded Cathay Dragon), carried nearly 27 million passengers and over 1.8 million tons of cargo and mail.

The airline was founded on 24 September 1946 by Australian Sydney H. de Kantzow and American Roy C. Farrell, with each man putting up HK$1 to register the airline. The airline made the world's first non-stop transpolar flight flying over the North Pole in July 1998, which was also the maiden flight to arrive at the then new Hong Kong International Airport. The airline celebrated its 60th anniversary in 2006; and as of October 2009[update], its major shareholders are Swire Pacific and Air China. It is reciprocally one of the major shareholders of Air China. Cathay Pacific is the world's tenth largest airline measured in terms of sales, and fourteenth largest measured in terms of market capitalisation. In 2010, Cathay Pacific became the world's largest international cargo airline, along with main hub Hong Kong International Airport as the world's busiest airport in terms of cargo traffic. 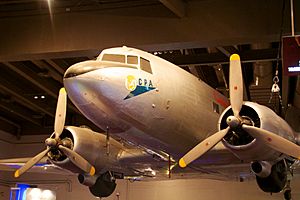 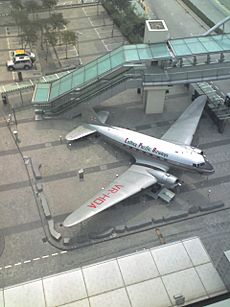 Niki, a DC-3 painted to imitate the appearance of the carrier's second aircraft, outside Cathay City

Cathay Pacific was founded as "Roy Farrell Export-Import Co., Ltd" (Chinese: 澳華出入口公司) in Shanghai in January 1946 by Australian Sydney de Kantzow and American Roy Farrell. Both men were ex-air force pilots who had flown the Hump, a route over the Himalayan mountains. Farrell purchased the airline's first aircraft, a Douglas DC-3, nicknamed Betsy, in New York on 6 October 1945. The company began freight services in January 1946 with two DC-3s between Australia and China (its first commercial flight was a shipment of clothes from Sydney to Shanghai), but the profitable business soon attracted attention from Republic of China government officials. After several instances where the company's planes were detained by authorities in Shanghai, on 11 May 1946 the company relocated, flying its two planes to Hong Kong.

Farrell and de Kantzow re-registered their business in Hong Kong on 24 September 1946 as "Cathay Pacific". Each man put up HK$1 to register the airline. They named it Cathay, the ancient name given to China, and Pacific because Farrell speculated that they would one day fly across the Pacific (which happened in the 1970s). The Chinese name for the company ("國泰") was not settled on until the 1950s. It comes from a Chinese idiom meaning "grand and peaceful state", and was at the time often used by other businesses called "Cathay" in English. 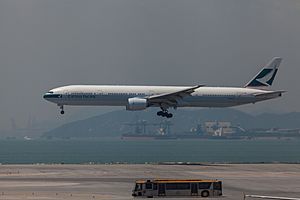 Cathay Pacific has two loyalty programs: The Marco Polo Club (The Club), the loyalty program, and Asia Miles, the travel reward program. Members of The Club are automatically enrolled as Asia Miles members. 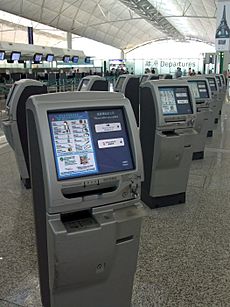 Beginning in 2007, Cathay Pacific launched more methods to check in for flights. Among them were self-check-in using a kiosk at Hong Kong International Airport and other select destinations and checking in via a mobile phone. Worldwide, only a limited number of other airlines offer these options. Cathay Pacific also launched the airline's first ever mobile boarding pass application, dubbed CX Mobile. Passengers can use the application to check flight arrivals and departures, check in for their flights, and read about the destinations they are flying to using City Guides. CX Mobile has become a hit with passengers, making Cathay Pacific one of the industry leaders in offering mobile services to users of smart phones.

Cathay Pacific is also now following a trend among many airlines to improve its brand image to customers and shareholders with social media, and is ranked fourth worldwide. The airline now uses a range of social media tools including Facebook, Flickr, Twitter, YouTube and blogging to share ideas with customers. In addition, it has launched a virtual tour to enable passengers to experience Cathay Pacific's new cabins and services without having to step aboard the aircraft.

On 4 January 2011, the cargo division of the airline, Cathay Pacific Cargo, became the first airline operating out of Hong Kong to fully switch to e-air waybill. This eliminates the need for all paper documents when issuing air waybills. The International Air Transport Association (IATA) selected nine countries and territories and airlines in which to run the e-AWB pilot programme, including Hong Kong and Cathay Pacific.

Cathay Pacific has been phasing in new cabin interiors and in-flight entertainment since June 2011. The first aircraft with the new seats is an Airbus A330-300 registered B-LAN, which flew its first commercial flight as Cathay Pacific Flight 101 between Hong Kong and Sydney on 1 April 2012. 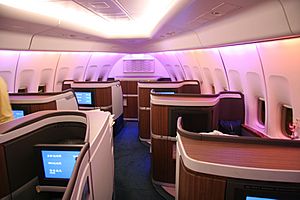 The first-class seats can be converted into fully lie-flat beds measuring 36 in × 81 in (91 cm × 206 cm). The seats include a massage function, a personal closet, an ottoman for stowage or guest seating, and adjustable 17 in (43 cm), 16:9 personal televisions (PTV). 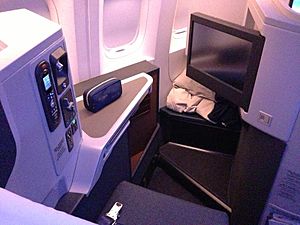 A business class seat on board the Boeing 777-300ER

After receiving extensive criticism for its high-walled herring-bone configuration business class seating on long-haul flights, which many passengers felt was too narrow and confined, Cathay Pacific embarked on a total redesign of business class seating. The new design is more conventional, emphasising the passenger's sense of personal space while also retaining privacy.

The new business class seats will be fitted into all new Airbus A330-300 and Boeing 777-300ER deliveries, with existing A330-300 and 777-300ER aircraft upgraded to the new seating and cabin by February 2013. However, the Boeing 747-400 and Airbus A340-300 aircraft will not be upgraded to the new seating and cabin due to the impending retirement of those planes; instead they will see a refresh of the old herringbone product. The new business class seats emphasise personal space and are equipped with a 15.4 in (39 cm) PTV with AVOD.

The new Regional Business Class is provided on Cathay Pacific's Boeing 777s (excluding the 777-300ER) and selected Airbus A330-300s. Regional Business Class seats have 21 in (53 cm) width and recline to 47 in (120 cm) of pitch and feature electrical recline and leg rest. A 12 in (30 cm) PTV is located in the seatback offers AVOD.

Cathay Pacific has been introducing a Premium Economy Class from March 2012. The seat pitch will be 38 inches – six inches more than Economy Class – and the seat itself will be wider and have a bigger recline. It will have a large meal table, cocktail table, footrest, a 10.6-inch personal television, an in-seat power outlet, a multi-port connector for personal devices, and extra personal stowage space. The Premium Economy Class seat offers a higher level of comfort with more living space in a separate cabin before the Economy Class zone. Passengers will also receive an "environmentally friendly" amenity kit with dental kit, socks and eyeshade for use during the journey. Larger pillows and noise-cancelling headsets will be provided. The new Premium Economy cabin will be installed on most Cathay Pacific long-haul aircraft. The first Boeing 777-300ER and Airbus A330-300 featuring Premium Economy Class has entered into service in March (substituting for regional aircraft) and scheduled service in April.

Starting in October 2012, the airline collaborated with Hong Kong lifestyle store GOD and introduced a new range of amenity kits for premium economy passengers. They are designed as collectibles with each bag being able to hook up to each other to form a wall-hanging accessory. The first two available are 'Joy' and 'Fortune, with designs that depicts Chinese gods relaxing in flight and of auspicious clouds respectively. The two types are available on outbound and inbound flights respectively. They include 90% recycled plastic bottles and toothbrush made mainly from biodegradable corn starch and cellulose. 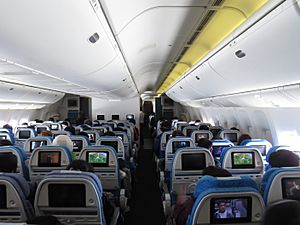 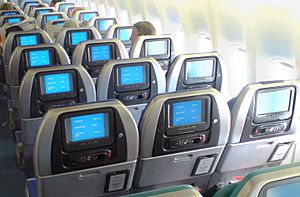 Cathay Pacific has been introducing a new economy class from March 2012. They have a six-inch recline (two inches over the current long-haul economy seat). These seats are 17.5 in (44 cm) in width and have 32 in (81 cm) of pitch.

The old Economy Class seats, offered on aircraft outfitted with the refurbished long-haul interiors, were designed by B/E Aerospace and introduced in July 2008. These seats include a fixed back design (shell) that allows passengers to recline without intruding on those seated behind, a 9 in (23 cm) PTV providing AVOD, AC power located behind a larger tray table, a coat hook and a literature pocket that has been relocated to below the seat cushion to create more leg room. The fixed shell of these seats has been criticised. The previous Economy Class seats each feature 6 in (15 cm) PTVs with a choice of 25 channels. These seats are 17 in (43 cm) in width and have 32 in (81 cm) of pitch. These seats are being replaced with the New Economy Class seats on aircraft receiving the Cathay Pacific's new long-haul interior configuration.

StudioCX, Cathay Pacific's in-flight entertainment system, equipped with personal televisions (PTVs) in every seat, offers the latest Hollywood blockbuster movies, popular Asian and Western TV programs, music and games. In addition, the airline provides a range of different newspapers and magazines from around the world, including the airline's award-winning in-flight magazine Discovery. Passengers with visual impairment can request for Hong Kong's South China Morning Post in Braille to be available on board.

StudioCX provides Audio/Video on Demand (AVOD) for every passenger and offers up to 100 movies, 350 TV programs, about 1000 CD albums in 25 different genres, 25 radio channels and more than 70 interactive games. Panasonic's eX2/eX3 system is installed and available on all aircraft while the next generation AVOD (including 5 Live TV and inflight WIFI) will be available from 2016 on all Airbus A350 and selected A330, Boeing 777 aircraft. 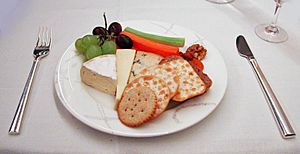 Food and beverages are complimentary on all flights, with two hot meals generally served on each flight for long haul flights, along with free alcoholic beverages. Foods served on flights from Hong Kong are provided by Cathay Pacific Catering Services (CPCS) facilities in Hong Kong. CLS Catering Services Limited, a joint venture with LSG Sky Chefs, provides the inflight catering from Toronto and Vancouver airports; while Vietnam Air Caterers, a joint venture between CPCS and Vietnam Airlines, provides the inflight catering for flights from Ho Chi Minh City.

All content from Kiddle encyclopedia articles (including the article images and facts) can be freely used under Attribution-ShareAlike license, unless stated otherwise. Cite this article:
Cathay Pacific Facts for Kids. Kiddle Encyclopedia.