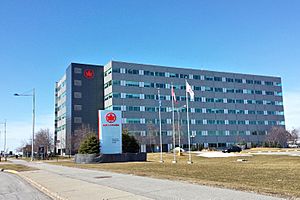 The headquarters of Air Canada in Montreal

Air Canada is Canada's largest airline. It flies from Canada to the United States, Europe, Asia, Australia, and some Caribbean countries. Air Canada began on September 1, 1937. It was first called Trans-Canada Air Lines. The first flight was from Vancouver to Seattle. The airline's name changed to Air Canada in 1964. Air Canada was privatized in 1989. A large strike was launched by Air Canada pilots in September 1998. Air Canada bought Canadian Airlines in 2000. Since the early 2000s Air Canada has had many financial problems.

All content from Kiddle encyclopedia articles (including the article images and facts) can be freely used under Attribution-ShareAlike license, unless stated otherwise. Cite this article:
Air Canada Facts for Kids. Kiddle Encyclopedia.