Swiss International Air Lines is the flag carrier of Switzerland. It began on March 31, 2002; the day after Swissair declared bankruptcy. The airline has nonstop flights throughout Switzerland, Europe, Africa, America and Asia. It's currently owned by Lufthansa. 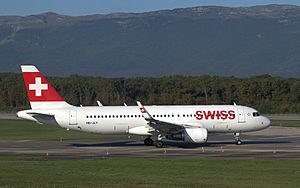 A Swiss Airbus A320 at Geneva.

All content from Kiddle encyclopedia articles (including the article images and facts) can be freely used under Attribution-ShareAlike license, unless stated otherwise. Cite this article:
Swiss International Air Lines Facts for Kids. Kiddle Encyclopedia.