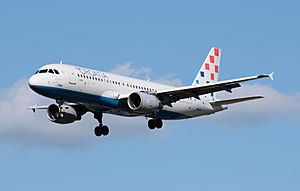 Croatia Airlines is a government owned airline of Croatia. It flies to domestic and international destinations. Its main airport is Zagreb Airport. It's usual destinations are Dubrovnik, Split and Zadar. It's headquarters are in Buzin.

All content from Kiddle encyclopedia articles (including the article images and facts) can be freely used under Attribution-ShareAlike license, unless stated otherwise. Cite this article:
Croatia Airlines Facts for Kids. Kiddle Encyclopedia.