Vienna (German: Wien) is the capital and largest city of Austria.

It is in the east of the country on the river Danube. More than 1,800,000 people live there (2016). It is an administrative district (Bundesland) of its own.

Before World War I, it was the capital of the Austro-Hungarian Empire. Its centre is a UNESCO World Heritage Site.

The history of the city goes back to the Roman Empire. The Romans started a military camp called Vindobona. The camp was in today's first district on the Danube river. The name came from the Celts, so there was probably a Celtic settlement before the Roman invasion. The Romans stayed until the 5th century. In medieval times, the settlement was still in use. The present name was mentioned in 881 in the Salzburger Annalen, where a battle ad weniam is mentioned.

In 976 the House of Babenberg became rulers of the area. They made Vienna their capital in 1155. Vienna was already an important city. In 1156, Austria became a Duchy, and Vienna was where the Duke who ruled the Duchy lived. In 1221, Vienna got municipal rights. It Is the second oldest city in Austria (Enns, in Upper Austria, is the oldest).

In 1278, the Duchy came to the Habsburg family. Rudolf IV started the university in 1365 and while he was duke the nave of the Gothic St. Stephan's Cathedral was built. Quarrels within the Hapsburg family caused an economic decline in Vienna. In 1438, Vienna became the residence of the Holy Roman Emperor.

During the time of the reformation Vienna was a Protestant city, but in the times of the Counter Reformation, Austria and Vienna were mostly Roman Catholic.

In 1529, Vienna was first besieged by the army of the Ottoman Empire, which had a border only 150 km east of Vienna. This hurt Vienna economically, but led to people fortifying the city (making it stronger). After a second siege, the Ottoman Empire could not take Vienna, and the city started getting larger.

During the baroque era, Vienna was rebuilt. Many residences for the nobility were built. Johann Bernhard Fischer von Erlach was an important architect in Vienna.

At the end of the 18th and the beginning of the 19th century Vienna was the home of important composers like Haydn, Mozart, Beethoven, Schubert.

After the revolution in 1848 Franz Joseph I. became emperor of the Austrian Empire, which was founded in 1806 after the liquidation of the Holy Roman Empire. He ruled till 1916. Vienna became a center of arts, culture and architecture. The city grew because the suburbs became part of the city. After 1858 the walls of the city were destroyed and the Ringstraße replaced them. Along that street houses of the rich citizens were built, as were public buildings like the city hall and the Burg theatre. The industrialisation started at the beginning of the century and made more people live there. In 1870, Vienna had one million people, and in 1910, two million people. With the creation of a large working class and poverty in Vienna the Labour Party (Sozialdemokratische Arbeiterpartei) became stronger.

Karl Lueger was the most important mayor in the time of Emperor Franz Josef. During his time important community plans were realized that made Vienna a modern city. However, Lueger was a radical anti-Semite. He was admired by the young Adolf Hitler, who spent some years before the First World War in Vienna. At this time, Vienna was an important place for the arts. Composers like Arnold Schönberg, Anton Webern, Alban Berg and Ernst Krenek were important for the development of modern music. Also the psychoanalysis was founded in Vienna by Sigmund Freud. Also the so-called Jugendstil in arts was part of Vienna's modern arts scene. Founding fathers of modern architecture lived and worked also in Vienna at this time (Otto Wagner, Adolf Loos)

After the end of the First World War the Austrian-Hungary Empire was dissolved and Vienna became capital of the Republic of Austria. In 1938, Austria was occupied by Germany. In Vienna the suffering of the Jewish inhabitants began. A lot of their properties was given to Austrians (Arisierung).

After the Second World War, which destroyed 20% of Vienna's buildings, Vienna was divided into four parts. The city was controlled by the allies like the other parts of Austria. In 1955 the state treaty between the allies and Austria was signed in Vienna's Belvedere. After that Vienna became an important city for international organisations. The first was 1957 the International Atomic Energy Organisation (IAEO) and 1965 the OPEC followed. 1980 the Vienna International Center was opened and Vienna is now the third UN-city together with New York and Geneva.

There are 23 districts in Vienna. They are:

Vienna has many things worth seeing. Here are a few of them. 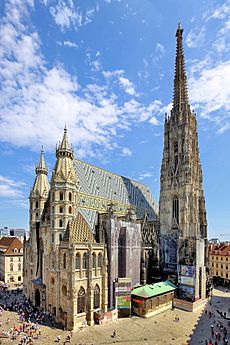 St. Stephan's Cathedral in Vienna is amongst the most famous buildings in Austria.

There are many old buildings, churches and museums in the city centre. Classical music and opera are popular in Vienna. The composers Wolfgang Amadeus Mozart, Ludwig van Beethoven and Brahms all worked in Vienna. Vivaldi also died in Vienna. The city has two world-famous orchestras: the Vienna Philharmonic and the Vienna Symphony.

Vienna is also the name of a song about the city, by the British group Ultravox.

All content from Kiddle encyclopedia articles (including the article images and facts) can be freely used under Attribution-ShareAlike license, unless stated otherwise. Cite this article:
Vienna Facts for Kids. Kiddle Encyclopedia.