Sir Karl Popper CH FRS FBA (28 July 1902 – 17 September 1994) was an Austrian and British philosopher and a professor at the London School of Economics.

He is considered one of the most influential philosophers of science of the 20th century, and also wrote on social and political philosophy, especially the evils of totalitarian ideas and politics. Popper is known for the idea of empirical falsification. 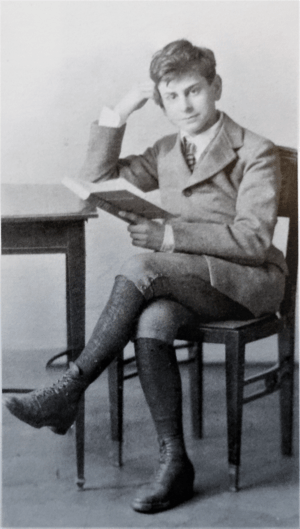 Karl Popper was born in Vienna (then in Austria-Hungary) to middle-class parents of Jewish origins, both of whom had converted to Christianity. Popper received a Lutheran upbringing and was educated at the University of Vienna. His father, Dr. Simon Siegmund Carl Popper, was a doctor of law at the Vienna University and a bibliophile who had 12,000–14,000 volumes in his personal library. Popper inherited from him both the library and the disposition.

In 1919 he became attracted by Marxism and subsequently joined the Association of Socialist School Students and also became a member of the Social Democratic Party of Austria, which was at that time a party that fully adopted the marxist ideology. He soon became disillusioned by Marx and abandoned the ideology and remained a passive supporter of social liberalism throughout his life.

In 1928 he earned a doctorate in Psychology and taught secondary school from 1930 to 1936. He published his first book, Logik der Forschung (The Logic of Scientific Discovery), in 1934. Here, he criticised psychologism, naturalism, inductionism, and logical positivism, and put forth his theory of potential falsifiability. 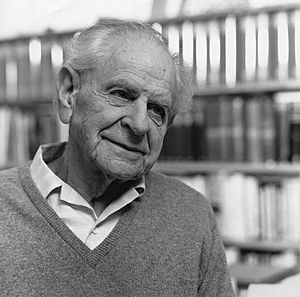 In 1937, the rise of Nazism and the threat of the Anschluss led Popper to emigrate to New Zealand, where he became lecturer in philosophy at Canterbury University College New Zealand (at Christchurch). In 1946, he moved to England to become a reader in logic and scientific method at the London School of Economics, where he was appointed professor in 1949.

He was president of the Aristotelian Society from 1958 to 1959. He was knighted by Queen Elizabeth II in 1965, and was elected a Fellow of the Royal Society in 1976. He retired from academic life in 1969, though he remained intellectually active for the rest of his life. He was invested with the Insignia of a Companion of Honour in 1982. Popper was a member of the Academy of Humanism and described himself as an agnostic, showing respect for the moral teachings of Judaism and Christianity.

Popper won many awards and honours in his field, including the Lippincott Award of the American Political Science Association, the Sonning Prize, and fellowships in the Royal Society, British Academy, London School of Economics, King's College London, Darwin College Cambridge, and Charles University, Prague. Austria awarded him the Grand Decoration of Honour in Gold. 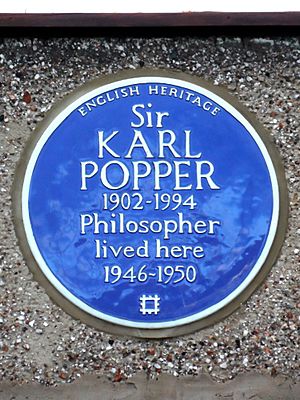 Popper sought to explain the apparent progress of scientific knowledge—how it is that our understanding of the universe seems to improve over time. This problem arises from his position that the truth content of our theories, even the best of them, cannot be verified by scientific testing, but can only be falsified. If so, then how is it that the growth of science appears to result in a growth in knowledge? In Popper's view, the advance of scientific knowledge is an evolutionary process characterised by his formula:

He died in 1994. After cremation, Popper's ashes were taken to Vienna and buried at Lainz cemetery adjacent to the ORF Centre, where his wife Josefine Anna Henninger - who had died in Austria several years before had already been buried.

All content from Kiddle encyclopedia articles (including the article images and facts) can be freely used under Attribution-ShareAlike license, unless stated otherwise. Cite this article:
Karl Popper Facts for Kids. Kiddle Encyclopedia.