The Anschluss (or Anschluß) was the annexation of Austria by Germany in 1938.

After the First World War, when both the Austria-Hungary Empire and the German Empire were abolished, many hoped that the Republic of German Austria would be unified with the German Republic in hope for a Greater Germany, which was to include all Germans.

This was forbidden by the Treaty of Versailles. 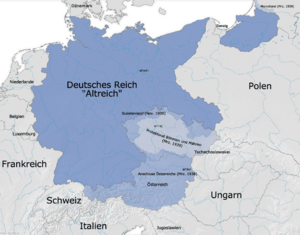 Native Austrian Adolf Hitler met Austrian Chancellor Kurt Schuschnigg on 12 February 1938 in Berchtesgaden, Bavaria and ordered him to end the ban on political parties, reinstate full party freedom, release all imprisoned members of the Nazi party and let them take part in the government.

Hitler said to do this or face an invasion as he was to make union between Austria and Germany by any possible means.

So Schuschnigg did what Hitler demanded, and appointed Arthur Seyss-Inquart, a pro-Nazi lawyer, as Interior Minister and another Nazi, Edmund Glaise-Horstenau, as a Minister without Portfolio.

In January 1938 Schuschnigg had been told to fire the chief of staff of the Austrian Army, Alfred Jansa, from his position. Jansa and his staff had plans for defending Austria against a Wehrmacht attack. Hitler did not want this to happen.

Schuschnigg realised that his new ministers were trying to take over from him. To get support Schuschnigg allowed socialists and communists legally to appear in public again. The parties had been banned on 12 February 1934 in the Austrian Civil War. The communists said they supported the Austrian government. The socialists wanted more promises from Schuschnigg before they were willing to side with him.

On 9 March Schuschnigg announced a plebiscite on the independence of Austria for 13 March.

To help his side to win, Schuschnigg set the minimum voting age at 24. Many of those who supported Nazism and union with Germany were young, so this move was to stop them from voting.

Hitler said that the plebiscite would be subject to major fraud and that Germany would not accept it. Also, the German Ministry of Propaganda issued press reports that riots had broken out in Austria and that large parts of the Austrian population were calling for German troops to restore order. Schuschnigg immediately said publicly that reports of riots were false.

Hitler sent an ultimatum to Schuschnigg on 11 March, saying that he must hand over all power to the Austrian Nazis or face an invasion.

Schuschnigg resigned as Chancellor that evening. He could not persuade France or Britain to help.

In the radio broadcast when he announced his resignation, he said that he accepted the changes and allowed the Nazis to take over the government in order to avoid bloodshed.

Meanwhile, Austrian President Wilhelm Miklas refused to appoint Seyß-Inquart as Chancellor and asked other Austrian politicians instead. However, the Nazis were well organised. Within hours they managed to take control of many parts of Vienna, including the Ministry of Internal Affairs (controlling the Police). As Miklas continued to refuse to appoint a Nazi government and Seyss-Inquart still could not send a telegram in the name of the Austrian government demanding German troops to restore order, Hitler became furious. At about 10 PM, well after Hitler had signed and issued the order for the invasion, Göring and Hitler gave up on waiting and sent a forged telegram pretending to be a request by the Austrian Government for German troops to enter Austria. Around midnight, after nearly all critical offices and buildings had fallen into Nazi hands in Vienna and the main political party members of the old government had been arrested, Miklas finally appointed Seyss-Inquart Chancellor. 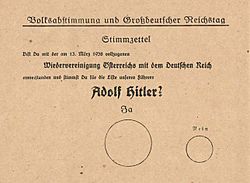 Voting ballot from 10 April 1938. The ballot text reads "Do you agree with the reunification of Austria with the German Empire that was enacted on 13 March 1938, and do you vote for the party of our leader Adolf Hitler?," the large circle is labelled "Yes," the smaller "No."

On the morning of 12 March, the 8th Army of the German Wehrmacht crossed the German-Austrian border. They were not stopped by the Austrian Army, instead the Wehrmacht troops were greeted by cheering Austrian Germans with Hitler salutes, Nazi flags and flowers.

This is why the annexing of Austria without one single shot being fired is sometimes called the Blumenkrieg (war of flowers).

Hitler's car crossed the border in the afternoon at Braunau, his birthplace. In the evening, he arrived at Linz and was welcomed at the city hall. Goering, in a telephone call that evening, said: "There is unbelievable jubilation in Austria. We ourselves did not think that sympathies would be so intense."

On 2 April 1938, 200,000 Austrians gathered on the Heldenplatz (Square of Heroes) to hear Hitler proclaim the Austrian Anschluss. Hitler later commented: "Certain foreign newspapers have said that we fell on Austria with brutal methods. I can only say: even in death they cannot stop lying. I have in the course of my political struggle won much love from my people, but when I crossed the former frontier (into Austria) there met me such a stream of love as I have never experienced. Not as tyrants have we come, but as liberators."

The Anschluss was given immediate effect by a law on 13 March, subject to ratification by a plebiscite. Austria became the province of Ostmark, and Seyss-Inquart was appointed Governor. The plebiscite was held on 10 April and officially recorded a support of 99.73% of the voters.

Most historians agree that the result was not fixed, but the voting process was neither free nor secret. Officials were present directly beside the voting booths and received the voting ballot by hand (in contrast to a secret vote where the voting ballot is inserted into a closed box). In some parts of Austria the referendum on the independence of Austria on 13 March was held despite the Wehrmacht's presence in Austria (it took up to 3 days to occupy every part of Austria). For instance, in the village of Innervillgraten a majority of 95% voted for Austria's independence.

Austria remained part of the Third Reich until the end of World War II when a preliminary Austrian Government declared the Anschluss null und nichtig (null and void) on April 27 1945. After the war, then allied-occupied Austria was recognized and treated as a separate country, but was not restored to sovereignty until the Austrian State Treaty and Austrian Declaration of Neutrality, both of 1955, largely due to the rapid development of the Cold War and disputes between the Soviet Union and its former allies over its foreign policy.

All content from Kiddle encyclopedia articles (including the article images and facts) can be freely used under Attribution-ShareAlike license, unless stated otherwise. Cite this article:
Anschluss Facts for Kids. Kiddle Encyclopedia.