Treaty of Versailles facts for kids 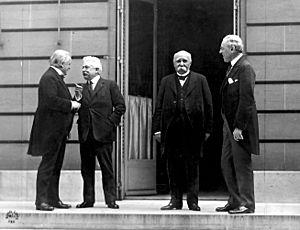 The Treaty of Versailles was a peace treaty between the six nations, France, Germany, Britain, Austria-Hungary, Japan and the United States after World War I. The treaty was made in 1919, but the German government did not participate in it. In fact, Germany had the choice between signing it or facing the occupation of Germany by Allied troops. This was known as a diktat Frieden. This angered the German people as they believed that they did not start the war.

The French made the Treaty unfavorable for the Germans so that Germany would not be able to start a new war. Thus, Germany had to reduce its armed forces from 6 million to 100,000 men, and get rid of its submarines, military aircraft and most of their artillery, such as cannons. Their Navy battleships were limited to only six small ones. Germany also had to give back French territories it had occupied, as well as large territories of its own to Poland, for instance, and all of its colonies. A heavy economical burden for Germany was to pay back the very big World War I reparations for the damage done to the Allied countries, mostly France, during World War I by German troops. This sum was not fixed. 132 billion gold marks had to be paid only as a first part of the German debt. They only finished paying off this debt in 2010.

This Treaty can be seen as a one-sided peace diktat for Germany, a treaty which later was used as a reason for Germany's nationalists and Adolf Hitler to try to get the support of the Germans to get rid of the "chains of Versailles," which finally led to World War II.

The treaty made a League of Nations, which decided things after the treaty was signed. It solved some international disputes without war, but could not stop World War II.

Outcome for the Central Powers 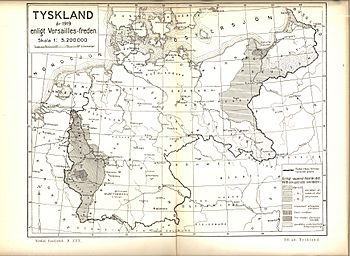 Germany had to give back French areas (Alsace-Lorraine) taken by Germany in the Franco-Prussian War, which Germany had won and which was still an embarrassment for France. The French made Germany take its troops out of the Rhineland (the long stretch of land on Germany's border with France where the Rhine river flows), which was an important part of land for Germany where many factories and businesses existed. If Germany put troops back into the Rhineland the punishment would be France invading Germany.

Germany also had to give many parts to Poland, a new country made out of old Russian and Austrian parts and the Polish and Lithuanian people who lived in them. Poland was a very strong kingdom a few hundred years before but Austria, Prussia and Russia had split it between them.

Belgium was given Moresnet and Eupen and Malmedy. This is the main reason that Belgium now has a German-speaking community.

Versailles also split up many large empires on the losing side. The U.S. President, Woodrow Wilson, thought this was a very good idea because many people in Europe wanted to be free from the big empires. But it also created problems.

Austria-Hungary was split into many countries. One was Austria. Austria was meant to be the homeland of the Austrians, who spoke German and mainly ruled Austria-Hungary. Its capital was Vienna. One of the problems of Versailles was that many Austrians, like Adolf Hitler, thought that Austria was meant to be part of Germany. This led to the later German occupation of Austria.

The new country of Hungary was also created. Like Poland, it was a country that was strong on its own centuries before. Its capital was Budapest. Another new country, Czechoslovakia was created to be the homeland of the Czechs and Slovaks. The Czech part was made up of the country once called Bohemia and Moravia. Its capital was Prague. Many Germans lived on its borders called the Sudetenland, which was why Adolf Hitler insisted that it should belong to Germany.

Bosnia, Slovenia, Croatia (which were parts of Austria-Hungary), northern Macedonia (which was part of Bulgaria), Serbia and Montenegro made one country, called Yugoslavia. It was made to be a Slav homeland, but there were many religious, language and national differences.

New countries by the Baltic Sea called Estonia, Finland, Latvia and Lithuania were created. The Russian Revolution started during the war, and later resulted in the death of Tzar Nicholas II of Russia and the formation of a Communist state. A civil war raged in Russia between the anti-Communist White Russians and pro-Soviet Red Russians. Russia had lost control of its western territory which made up Estonia, Finland, Latvia, Lithuania and parts of Poland. During the Second World War, the Soviet Union reclaimed Estonia, Latvia, Lithuania, and half of Poland.

It was agreed in another treaty called the Treaty of Sèvres that Greece would take parts of Western Turkey (called Ionia) and its past most important city, Constantinople from Turkey. Greece took them at first but a new Turkish army drove the Greeks out, killing many Greek people. Greece did gain most of the islands in the Aegean Sea from Turkey and parts of Bulgaria.

The League of Nations decided that parts of old Turkey were given to France and Great Britain to protect and keep peace in the area. Britain ruled Palestine, Iraq and Transjordan, which would become Israel, Iraq, and Jordan. France ruled Syria and Lebanon.

The German Empire became the Weimar Republic. A big problem for Germany was to pay back a giant amount of money for the all of the damage done to the Allied countries, mostly France, during World War I. This made Germany one of the poorest countries in Europe for almost 20 years, and caused political fighting in Germany. Germany officially finished paying off its debt on Sunday, October 3, 2010. The two most important parties, the Communists (who wanted a Communist revolution as had happened in Russia) and the Nazis (who thought Germany should become the most powerful country in Europe) fought for many years.

The debt to the Allies was made easier for the Germans during the Great Depression, and all debt was cancelled in 1932. Many Germans hated the treaty and some even wanted to fight more after Versailles.

The League of Nations created after Versailles was usually not powerful enough to stop wars, either. Japan took a part of China called Manchuria and the League was not able to stop it. Italy invaded Ethiopia and although the Ethiopian Emperor begged the League to help him, it did not. Germany, Japan and Italy became the Axis powers, and by invading many peaceful countries caused World War II. The United States and the USSR did not even join the League, even though it was the idea of US President Woodrow Wilson in the first place. The League was never taken seriously, even though it was created to make sure Versailles was respected. The treaty failed to keep peace in the end, and was a reason for Nazi Germany and Adolf Hitler to win the support of the poorer Germans to get rid of the "chains of Versailles", leading to World War II.

All content from Kiddle encyclopedia articles (including the article images and facts) can be freely used under Attribution-ShareAlike license, unless stated otherwise. Cite this article:
Treaty of Versailles Facts for Kids. Kiddle Encyclopedia.