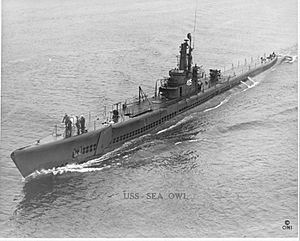 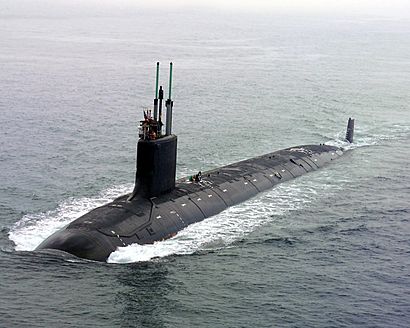 A submarine (or Sub) is a vessel that goes under water. Most large submarines are war vessels. Some small ones are used for scientific or business purposes. These are often called "submersibles" and cannot go far or stay long away from base. Some rich people buy their own to explore under the sea and look at fish. A submarine is always called a boat, not a ship.

In early times, submarines were often powered by hand. This is because boat engines had not been invented yet. They were almost always designed to be used for war. Submarines would try to sink enemy ships by crude methods. These included drilling screws into their wooden hulls. Some tried to blow up a ship. This often destroyed the submarine, too.

The First Battle of the Atlantic was the first major battle that was mainly fought between submarines and their enemies. As in later wars, the main jobs of submarines were to enforce blockade and to sink enemy warships. They usually attacked freighters at night, shooting with their guns and then hiding under the water. Sometimes they used their torpedoes, especially against large ships and warships.

After World War II better sonar helped the enemies of submarines to find and kill them. New subs were more streamlined and had no artillery because water dragging against the guns made noise underwater and slowed the subs.

Most large modern military submarines are powered by nuclear reactors. These submarines often have a system which can get air from the seawater. These two things allow them to stay under water for long periods of time. Their most important uses are attacking ships or launching missiles. These include cruise missiles and nuclear missiles. There are two main kinds of subs. Attack submarines are small and fast. They attack other subs and surface ships with a special kind of underwater bomb called a torpedo. Missile subs are larger and slower. They are built to shoot missiles at far-away targets on land. Missile subs are usually big enough to carry commandos and launch them safely from their torpedo tubes.

All content from Kiddle encyclopedia articles (including the article images and facts) can be freely used under Attribution-ShareAlike license, unless stated otherwise. Cite this article:
Submarine Facts for Kids. Kiddle Encyclopedia.