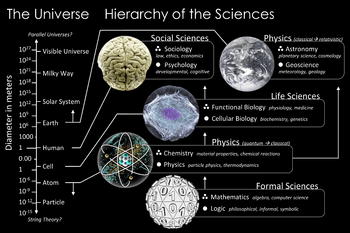 The scale of the universe mapped to the branches of science.

Combustion and chemical reactions were studied by Michael Faraday and reported in his lectures before the Royal Institution: The Chemical History of a Candle, 1861

Science is what we do to find out about the natural world. Natural sciences include physics, chemistry, biology, geology and astronomy. Science uses mathematics and logic, which are sometimes called "formal sciences". Natural science makes observations and experiments. Science produces accurate facts, scientific laws and theories. 'Science' also refers to the large amount of knowledge that has been found using this process.

Research uses the scientific method. Scientific research uses hypotheses based on ideas or earlier knowledge, which can be categorized through different topics. Then those hypotheses are tested by experiments.

People who study and research science and try to find out everything about it are called scientists. Scientists study things by looking at them very carefully, by measuring them, and by doing experiments and tests. Scientists try to explain why things act the way they do, and predict what will happen. 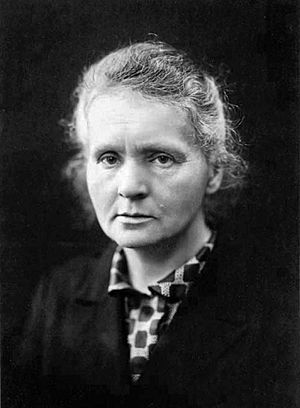 Marie Curie was the first person to be awarded two Nobel Prizes: Physics in 1903 and Chemistry in 1911 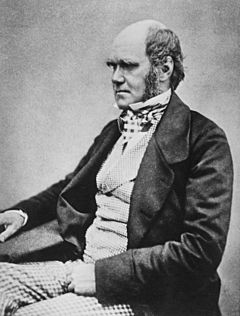 Charles Darwin in 1854, by then working towards publication of On the Origin of Species

Today, "science" usually refers to a way of pursuing knowledge, not just the knowledge itself. It is mainly about the phenomena of the material world. In the 17th and 18th centuries scientists increasingly sought to formulate knowledge in terms of laws of nature such as Newton's laws of motion. And over the course of the 19th century, the word "science" became increasingly associated with the scientific method itself, as a way to study the natural world, including physics, chemistry, geology and biology.

A famous example of science in action was the expedition led by Arthur Eddington to Principe Island in Africa in 1919.

He went there to record the positions of stars around the Sun during a solar eclipse. The observation of star positions showed that the apparent star positions close to the Sun were changed. In effect, the light passing the Sun was pulled towards the Sun by gravitation. This confirmed predictions of gravitational lensing made by Albert Einstein in the general theory of relativity, published in 1915.

Discoveries in fundamental science can be world-changing. For example:

Other features of science 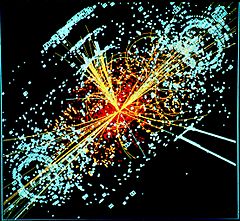 A simulated event in the CMS detector of the Large Hadron Collider, featuring a possible appearance of the Higgs boson

Not everyone completely agrees about how science works. Some philosophers and scientists say that scientific theories are only accepted for the time being. They last so long as they are the best explanation. When theories no longer explain the data, they are discarded and replaced. Or, sometimes scientists will make a theory better rather than discard it, or they will keep on using the theory hoping that it will be made better eventually.

Science is a way to get knowledge by discarding what is not true.

Before a scientific article is published, other scientists read the article and decide whether the explanations make sense from the data. This is called peer review. After articles are published, other scientists will also check if the same experiments, observations or tests produce the same data again. Peer review and repeating experiments are the only way to be sure the knowledge is correct.

Science makes models of nature, models of our universe, and medicine. There are many different sciences with their own names. However it is not right to say "science says" any one thing. Science is a process, not just the facts and rules believed at one time.

Some types of science

All content from Kiddle encyclopedia articles (including the article images and facts) can be freely used under Attribution-ShareAlike license, unless stated otherwise. Cite this article:
Science Facts for Kids. Kiddle Encyclopedia.