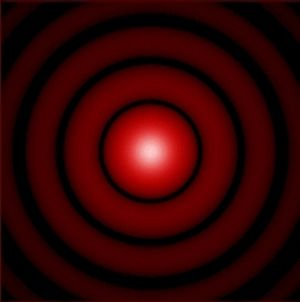 Diffraction pattern made by light passing through a single pinhole

Diffraction is a physics concept which occurs when waves bend around small obstacles, or spread out after they pass through small openings. Diffraction occurs with all waves, including sound waves, water waves, and electromagnetic waves such as light that the eye can see. Diffraction also occurs with matter such as electrons.

A sketch of two-slit diffraction. The wave that passed through the slits was diffracted and will interfere with itself.

All content from Kiddle encyclopedia articles (including the article images and facts) can be freely used under Attribution-ShareAlike license, unless stated otherwise. Cite this article:
Diffraction Facts for Kids. Kiddle Encyclopedia.