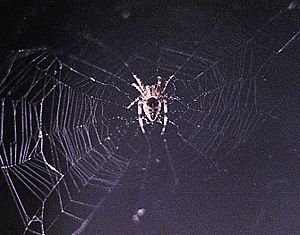 The first web spun by the spider Arabella in orbit 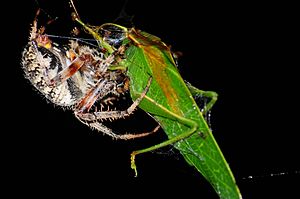 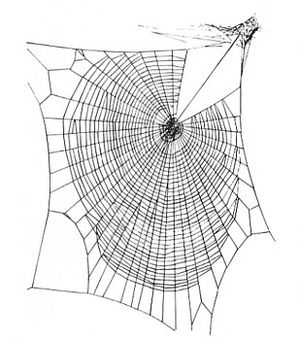 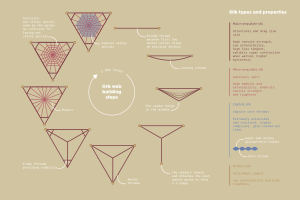 Infographic illustrating the process of constructing an orb web 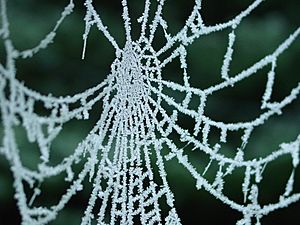 When spiders moved from the water to the land in the Early Devonian period, they started making silk to protect their bodies and their eggs. Spiders gradually started using silk for hunting purposes, first as guide lines and signal lines, then as ground or bush webs, and eventually as the aerial webs that are familiar today.

Spiders produce silk from their spinneret glands located at the tip of their abdomen. Each gland produces a thread for a special purpose – for example a trailed safety line, sticky silk for trapping prey or fine silk for wrapping it. Spiders use different gland types to produce different silks, and some spiders are capable of producing up to eight different silks during their lifetime.

Most spiders have three pairs of spinnerets, each having its own function – there are also spiders with just one pair and others with as many as four pairs.

Webs allow a spider to catch prey without having to expend energy by running it down. Thus it is an efficient method of gathering food. However, constructing the web is in itself an energetically costly process because of the large amount of protein required, in the form of silk. In addition, after a time the silk will lose its stickiness and thus become inefficient at capturing prey. It is common for spiders to eat their own web daily to recoup some of the energy used in spinning. The silk proteins are thus recycled.

The tensile strength of spider silk is greater than the same weight of steel and has much greater elasticity. Its microstructure is under investigation for potential applications in industry, including bullet-proof vests and artificial tendons. Researchers have used genetically modified mammals to produce the proteins needed to make this material. 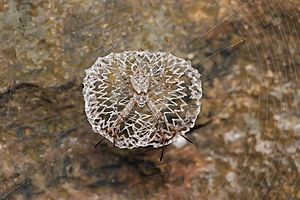 Argiope sp. sitting on web decorations at the center of the web

Several different types of silk may be used in web construction, including a "sticky" capture silk and "fluffy" capture silk, depending on the type of spider. Webs may be in a vertical plane (most orb webs), a horizontal plane (sheet webs), or at any angle in between. It is hypothesized that these types of aerial webs co-evolved with the evolution of winged insects. As insects are spiders' main prey, it is likely that they would impose strong selectional forces on the foraging behavior of spiders. Most commonly found in the sheet-web spider families, some webs will have loose, irregular tangles of silk above them. These tangled obstacle courses serve to disorient and knock down flying insects, making them more vulnerable to being trapped on the web below. They may also help to protect the spider from predators such as birds and wasps. 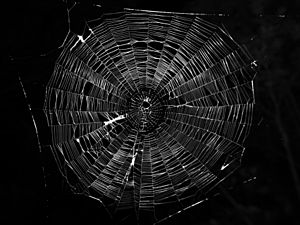 Most orb weavers construct webs in a vertical plane, although there are exceptions, such as Uloborus diversus, which builds a horizontal web. During the process of making an orb web, the spider will use its own body for measurements.

Many webs span gaps between objects which the spider could not cross by crawling. This is done by first producing a fine adhesive thread to drift on a faint breeze across a gap. When it sticks to a surface at the far end, the spider feels the change in the vibration. The spider reels in and tightens the first strand, then carefully walks along it and strengthens it with a second thread. This process is repeated until the thread is strong enough to support the rest of the web.

After the radials are complete, the spider fortifies the center of the web with about five circular threads. It makes a spiral of non-sticky, widely spaced threads to enable it to move easily around its own web during construction, working from the inside outward. Then, beginning from the outside and moving inward, the spider methodically replaces this spiral with a more closely spaced one made of adhesive threads. It uses the initial radiating lines as well as the non-sticky spirals as guide lines. The spaces between each spiral and the next are directly proportional to the distance from the tip of its back legs to its spinners. This is one way the spider uses its own body as a measuring/spacing device. While the sticky spirals are formed, the non-adhesive spirals are removed as there is no need for them any more. 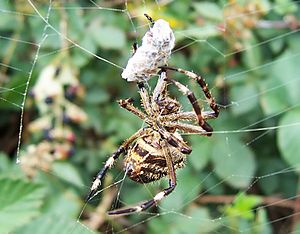 After the spider has completed its web, it chews off the initial three center spiral threads then sits and waits. If the web is broken without any structural damage during the construction, the spider does not make any initial attempts to rectify the problem.

The spider, after spinning its web, then waits on or near the web for a prey animal to become trapped. The spider senses the impact and struggle of a prey animal by vibrations transmitted through the web. A spider positioned in the middle of the web makes for a highly visible prey for birds and other predators, even without web decorations; many day-hunting orb-web spinners reduce this risk by hiding at the edge of the web with one foot on a signal line from the hub or by appearing to be inedible or unappetizing.

Spiders do not usually adhere to their own webs, because they are able to spin both sticky and non-sticky types of silk, and are careful to travel across only non-sticky portions of the web. However, they are not immune to their own glue. Some of the strands of the web are sticky, and others are not. For example, if a spider has chosen to wait along the outer edges of its web, it may spin a non-sticky prey or signal line to the web hub to monitor web movement. However, in the course of spinning sticky strands, spiders have to touch these sticky strands. They do this without sticking by using careful movements, dense hairs and nonstick coatings on their feet to prevent adhesion. 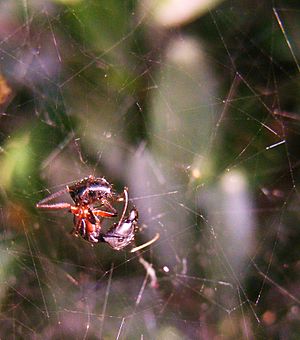 A soldier ant finds itself entangled in the web of a garden spider.

Some species of spider do not use webs for capturing prey directly, instead pouncing from concealment (e.g. trapdoor spiders) or running them down in open chase (e.g. wolf spiders). The net-casting spider balances the two methods of running and web spinning in its feeding habits. This spider weaves a small net which it attaches to its front legs. It then lurks in wait for potential prey and, when such prey arrives, lunges forward to wrap its victim in the net, bite and paralyze it. Hence, this spider expends less energy catching prey than a primitive hunter such as the wolf spider. It also avoids the energy loss of weaving a large orb web.

Some spiders manage to use the signaling-snare technique of a web without spinning a web at all. Several types of water-dwelling spiders rest their feet on the water's surface in much the same manner as an orb-web user. When an insect falls onto the water and is ensnared by surface tension, the spider can detect the vibrations and run out to capture the prey.

Cobweb paintings, which began during the 16th century in a remote valley of the Austrian Tyrolean Alps, were created on fabrics consisting of layered and wound cobwebs, stretched over cardboard to make a mat, and strengthened by brushing with milk diluted in water. A small brush was then used to apply watercolor to the cobwebs, or custom tools to create engravings. Fewer than a hundred cobweb paintings survive today, most of which are held in private collections.

In traditional European medicine, cobwebs were used on wounds and cuts and seem to help healing and reduce bleeding. Spider webs are rich in vitamin K, which can be effective in clotting blood. Webs were used several hundred years ago as pads to stop an injured person's bleeding. The effects of some drugs can be measured by examining their effects on a spider's web-building.

Spider web strands have been used for crosshairs or reticles in telescopes.

Development of technologies to mass-produce spider silk has led to manufacturing of prototype military protection, medical devices, and consumer goods.

All content from Kiddle encyclopedia articles (including the article images and facts) can be freely used under Attribution-ShareAlike license, unless stated otherwise. Cite this article:
Spider web Facts for Kids. Kiddle Encyclopedia.