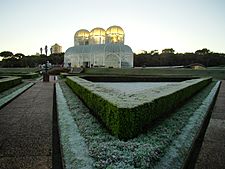 Curitiba (Southern Brazil) is the coldest of Brazil's state capitals; the greenhouse of the Botanical Garden of Curitiba protects sensitive plants.

Frost is ice that is formed when water vapor freezes onto a surface. It has a white, powdery appearance. It forms on cold surfaces when the temperature of the air is very low. It can destroy crops.

Many plants can be damaged or killed by freezing temperatures or frost. This varies with the type of plant and tissue exposed to low temperatures. Greenhouses help to protect crops from cold and frost damage. 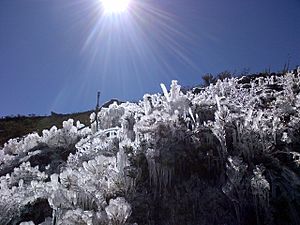 Frost in the highest town in Venezuela, Apartaderos. Because of its location in an alpine tundra ecosystem called páramo, there exists a daily freeze-and-thaw cycle, sometimes described as "summer every day and winter every night."

If a solid surface is chilled below the dew point of the surrounding humid air and the surface itself is colder than freezing, ice will form on it. If the water deposits as a liquid that then freezes, it forms a coating that may look glassy, opaque, or crystalline, depending on its type. Depending on context, that process also may be called atmospheric icing. The ice it produces differs in some ways from crystalline frost, which consists of spicules of ice that typically project from the solid surface on which they grow.

The main difference between the ice coatings and frost spicules arises from the fact that the crystalline spicules grow directly from desublimation of water vapour from air, and desublimation is not a factor in icing of freezing surfaces. For desublimation to proceed the surface must be below the frost point of the air, meaning that it is sufficiently cold for ice to form without passing through the liquid phase. The air must be humid, but not sufficiently humid to permit the condensation of liquid water, or icing will result instead of desublimation. The size of the crystals depends largely on the temperature, the amount of water vapor available, and how long they have been growing undisturbed.

As a rule, except in conditions where supercooled droplets are present in the air, frost will form only if the deposition surface is colder than the surrounding air. For instance frost may be observed around cracks in cold wooden sidewalks when humid air escapes from the warmer ground beneath. Other objects on which frost commonly forms are those with low specific heat or high thermal emissivity, such as blackened metals; hence the accumulation of frost on the heads of rusty nails.

The apparently erratic occurrence of frost in adjacent localities is due partly to differences of elevation, the lower areas becoming colder on calm nights. Where static air settles above an area of ground in the absence of wind, the absorptivity and specific heat of the ground strongly influence the temperature that the trapped air attains. 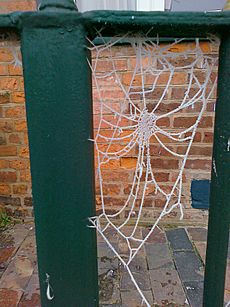 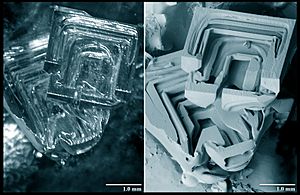 Depth hoar, imaged with light and with scanning electron microscopy.

Hoar frost (also hoarfrost, radiation frost, or pruina) refers to white ice crystals, deposited on the ground or loosely attached to exposed objects such as wires or leaves. They form on cold, clear nights when conditions are such that heat radiates out to the open sky faster than it can be replaced from nearby sources such as wind or warm objects. Under suitable circumstances, objects cool to below the frost point of the surrounding air, well below the freezing point of water. Such freezing may be promoted by effects such as flood frost or frost pocket. These occur when ground-level radiation losses cool air until it flows downhill and accumulates in pockets of very cold air in valleys and hollows. Hoar frost may freeze in such low-lying cold air even when the air temperature a few feet above ground is well above freezing.

The name hoar comes from an Old English adjective that means "showing signs of old age"; in this context it refers to the frost that makes trees and bushes look like white hair.

Hoar frost may have different names depending on where it forms:

When surface hoar covers sloping snowbanks, the layer of frost crystals may create an avalanche risk; when heavy layers of new snow cover the frosty surface, furry crystals standing out from the old snow hold off the falling flakes, forming a layer of voids that prevent the new snow layers from bonding strongly to the old snow beneath. Ideal conditions for hoarfrost to form on snow are cold clear nights, with very light, cold air currents conveying humidity at the right rate for growth of frost crystals. Wind that is too strong or warm destroys the furry crystals, and thereby may permit a stronger bond between the old and new snow layers. However, if the winds are strong enough and cold enough to lay the crystals flat and dry, carpeting the snow with cold, loose crystals without removing or destroying them or letting them warm up and become sticky, then the frost interface between the snow layers may still present an avalanche danger, because the texture of the frost crystals differs from the snow texture and the dry crystals will not stick to fresh snow. Such conditions still prevent a strong bond between the snow layers.

In very low temperatures where fluffy surface hoar crystals form without subsequently being covered with snow, strong winds may break them off, forming a dust of ice particles and blowing them over the surface. The ice dust then may form yukimarimo, as has been observed in parts of Antarctica, in a process similar to the formation of dust bunnies and similar structures.

Hoar frost and white frost also occurs in man-made environments such as in freezers or industrial cold storage facilities. If such cold spaces or the pipes serving them are not well insulated and are exposed to ambient humidity, the moisture will freeze instantly depending on the freezer temperature. The frost may coat pipes thickly, partly insulating them, but such inefficient insulation still is a source of heat loss. 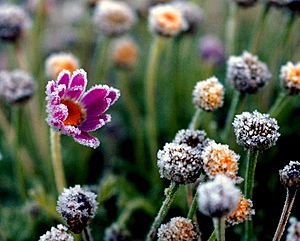 A flower with advection frost on the tips of its petals. 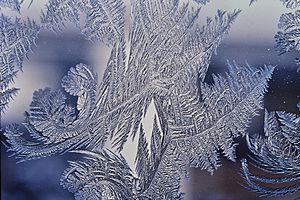 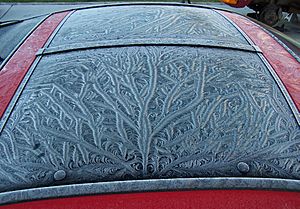 Window frost (also called fern frost or ice flowers) forms when a glass pane is exposed to very cold air on the outside and warmer, moderately moist air on the inside. If the pane is not a good insulator (for example, if it is a single pane window), water vapour condenses on the glass forming frost patterns. With very low temperatures outside, frost can appear on the bottom of the window even with double pane energy efficient windows because the air convection between two panes of glass ensures that the bottom part of the glazing unit is colder than the top part. On unheated motor vehicles the frost will usually form on the outside surface of the glass first. The glass surface influences the shape of crystals, so imperfections, scratches, or dust can modify the way ice nucleates. The patterns in window frost form a fractal with a fractal dimension greater than one but less than two. This is a consequence of the nucleation process being constrained to unfold in two dimensions, unlike a snowflake which is shaped by a similar process but forms in three dimensions and has a fractal dimension greater than two.

If the indoor air is very humid, rather than moderately so, water will first condense in small droplets and then freeze into clear ice.

Similar patterns of freezing may occur on other smooth vertical surfaces, but they seldom are as obvious or spectacular as on clear glass.

White frost is a solid deposition of ice which forms directly from water vapour contained in air.

White frost forms when there is a relative humidity above 90% and a temperature below −8 °C (18 °F) and it grows against the wind direction, since air arriving from windward has a higher humidity than leeward air, but the wind must not be strong or it damages the delicate icy structures as they begin to form. White frost resembles a heavy coating of hoar frost with big, interlocking crystals, usually needle-shaped.

Rime is a type of ice deposition that occurs quickly, often under conditions of heavily saturated air and windy conditions. Technically speaking, it is not a type of frost, since usually supercooled water drops are involved, in contrast to the formation of hoar frost, in which water vapour desublimates slowly and directly. Ships travelling through Arctic seas may accumulate large quantities of rime on the rigging. Unlike hoar frost, which has a feathery appearance, rime generally has an icy solid appearance.

Black frost (or "killing frost") is not strictly speaking frost at all, because it is the condition seen in crops when the humidity is too low for frost to form, but the temperature falls so low that plant tissues freeze and die, becoming blackened, hence the term "black frost". Black frost often is called "killing frost" because white frost tends to be less cold, partly because the latent heat of freezing of the water reduces the temperature drop. 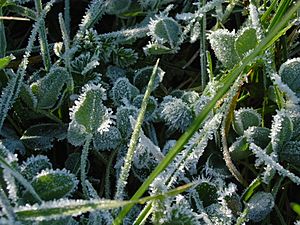 Frost on the grass of a public park in January.

Many plants can be damaged or killed by freezing temperatures or frost. This varies with the type of plant, the tissue exposed, and how low temperatures get: a "light frost" of −2 to 0 °C (28 to 32 °F) will damage fewer types of plants than a "hard frost" below −2 °C (28 °F).

Plants likely to be damaged even by a light frost include vines—such as beans, grapes, squashes, melons—along with nightshades such as tomatoes, eggplants and peppers. Plants that may tolerate (or even benefit) from frosts include:

Even those plants that tolerate frost may be damaged once temperatures drop even lower (below −4 °C or 25 °F). Hardy perennials, such as Hosta, become dormant after the first frosts and regrow when spring arrives. The entire visible plant may turn completely brown until the spring warmth, or may drop all of its leaves and flowers, leaving the stem and stalk only. Evergreen plants, such as pine trees, withstand frost although all or most growth stops. Frost crack is a bark defect caused by a combination of low temperatures and heat from the winter sun.

Vegetation is not necessarily damaged when leaf temperatures drop below the freezing point of their cell contents. In the absence of a site nucleating the formation of ice crystals, the leaves remain in a supercooled liquid state, safely reaching temperatures of −4 to −12 °C (25 to 10 °F). However, once frost forms, the leaf cells may be damaged by sharp ice crystals. Hardening is the process by which a plant becomes tolerant to low temperatures.

All content from Kiddle encyclopedia articles (including the article images and facts) can be freely used under Attribution-ShareAlike license, unless stated otherwise. Cite this article:
Frost Facts for Kids. Kiddle Encyclopedia.