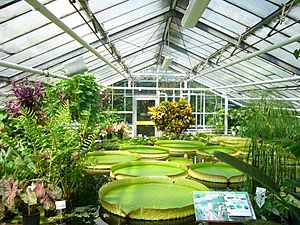 A greenhouse (also called a glass-house or hothouse) is a building where plants such as flowers and vegetables are grown. It usually has a glass or translucent plastic roof. Many greenhouses also have glass or plastic walls. Greenhouses warm up during the day via penetration of the sun's rays which heat the plants, soil and structure. This heat is given up gradually throughout the night.

Greenhouses come in many shapes and sizes, with different functions. Some people have small greenhouses in their backyard, or as a lean-to attached to their home, called mini greenhouses, or tomato houses. They want to start off their seeds and seedlings in a protected environment as well as those growing plants that need warmer conditions. Others, wishing to extend their living space, have house extensions in the form of mini-conservatories. Commercial companies usually have larger greenhouses for horticultural purposes, but have more substantial structures for plant displays where the public is admitted. For the same reason, botanic gardens usually have a high proportion of greenhouses with substantial structures

Many vegetables and flowers are grown in greenhouses in late winter and early spring, when it is still too cold to grow plants outside. Then these plants move into the soil outside as the weather warms up. Greenhouses are used to grow crops in cold countries such as Canada. The largest group of greenhouses in the world is in Leamington, Ontario (in Canada), where about 200 acres (0.8 km²) of tomatoes are grown in glass greenhouses. 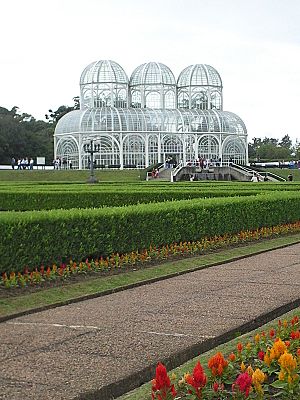 A glasshouse in the Botanical Garden of Curitiba, in Curitiba, Brazil.

Roman gardeners grew cucumbers in frames covered with oiled cloth or with sheets of mica. In the 1500s, Italian gardeners built structures for the tropical plants that explorers brought back to Italy. Jules Charles built the first modern greenhouse in Holland. In the 1800s, large greenhouses were built in England. The greenhouse concept also appeared in the Netherlands and then England in the 17th century

All content from Kiddle encyclopedia articles (including the article images and facts) can be freely used under Attribution-ShareAlike license, unless stated otherwise. Cite this article:
Greenhouse Facts for Kids. Kiddle Encyclopedia.