Richfield is a city in Hennepin County, Minnesota, United States. An inner-ring suburb of the Minneapolis–Saint Paul region, it is bordered by Minneapolis to the north, Minneapolis–Saint Paul International Airport to the east, Bloomington to the south, and Edina to the west. Best Buy, the U.S.'s largest electronics retailer, has its headquarters in Richfield. The population was 36,994 at the 2020 census. 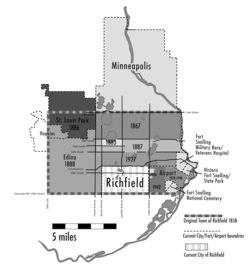 Map showing land annexations and Richfield's original borders as a town in 1854 and present day borders as a city.

The beginnings of Richfield date back to the 1850s, when it was still a small farming community. Close to Minneapolis and Fort Snelling, it was on the edge of a growing and expanding city with business and commerce not far away. One of the first settlers was Riley Bartholomew, a former General in the Ohio Militia who became a Richfield Justice of the Peace and a Minnesota State Senator. Bartholomew built a house on the east shore of Wood Lake in 1852, and the restored Riley Lucas Bartholomew House is listed on the National Register of Historic Places. Today, the house and site are maintained by the Richfield Historical Society. In the early days, Richfield extended as far north as Lake Street, and included present day Edina and parts of St. Louis Park and Hopkins on the west, and extended to the Mississippi and the Minnesota Rivers on the east, and to Bloomington on the south. On May 11, 1858, as Congress was admitting Minnesota into the Union, the early residents of Richfield had their first town meeting. That same year Richfield was named for the fertile farm land it encompassed. By 1879, the community's first town hall was constructed. Early residents were German, Irish and families from the New England area. These residents were soon joined by immigrants from Sweden, Norway and Denmark.

It was not until 1908 that Richfield became a village. From 1908 until 1950, Richfield's local government consisted of a President, three trustees, and a clerk. On November 7, 1950, residents voted for a city manager form of government, meaning the city had a Mayor, four council members, and one City Manager. This is still the form of government used today. Richfield's first Mayor was Clarence Christian, who began serving in 1951, but served as President under the old format dating back to 1948. By the late 1940s, the city's population started increasing rapidly as farmland was sold to developers who were building homes for veterans returning from World War II. In 1955, the Richfield Chamber of Commerce was formed and has been deeply involved in the development, as well as the redevelopment, of the community since that time.

The first half of the 20th century also saw the boundaries of Richfield change, as annexations decreased the size of the city. Three annexations by Minneapolis brought the village to 62nd Street, its present north boundary. In 1886, St. Louis Park formed a separate community followed by Edina in 1888 and a section of the far west was annexed by Hopkins in 1893. In 1905, a section of the east to 34th Avenue was requisitioned by Fort Snelling. In 1941, another section of East Richfield went to the Minneapolis–Saint Paul International Airport, and by 1955 all of the Wold-Chamberlain Field (municipal airport) was separated from the village.

Over the years, populations of all nearby communities increased and after World War II, Richfield flourished with commuters to Twin Cities jobs. Today, Richfield has a population of about 35,000 residents who live within seven square miles of neighborhoods, parks and shops.

Interstates 35W and 494 and Minnesota State Highways 62 and 77 are four of the main routes in the city. Other main routes include 66th Street.

The majority of the 10,000 single-family homes were constructed in the 1950s, and the 5,000 apartments date from the 1960s and early 1970s. The Richfield Rediscovered Housing Program has established an environment of change in the community as it encourages home remodeling, expansion, and reconstruction. The program is gradually changing the face of Richfield's residential neighborhoods, upgrading them from small, post-WWII styles to larger homes.

Richfield has more than 450 acres (1.8 km2) of parkland, 23 neighborhood parks and a nature preserve. Wood Lake Nature Center is a 150-acre (0.6 km2) park operated by the city of Richfield that features wetlands, walking paths and an interpretive center. When the Nature Center opened in 1971, it was one of the first urban nature center in the United States, and is currently home to more than 200 different kinds of birds and 30 mammals. 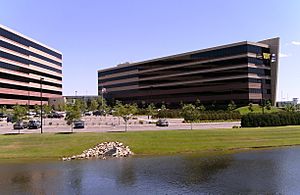 Richfield is home to the corporate campus of Best Buy

Best Buy Company, Inc. moved its corporate headquarters into the city in 2003, becoming the largest employer in Richfield.

In 2007, Cedar Point Commons opened in Richfield at Cedar Avenue and 66th Street, adjacent to Minneapolis–Saint Paul International Airport. SuperTarget and The Home Depot serve as its anchor tenants.

According to the City's 2014 Comprehensive Annual Financial Report, the top employers in the city are:

All content from Kiddle encyclopedia articles (including the article images and facts) can be freely used under Attribution-ShareAlike license, unless stated otherwise. Cite this article:
Richfield, Minnesota Facts for Kids. Kiddle Encyclopedia.