The center of population of Minnesota is in Hennepin County, in the city of Minneapolis.

Hennepin County was created in 1852 by the Minnesota Territorial Legislature. Father Louis Hennepin's name was chosen because he originally named St. Anthony Falls and recorded some of the earliest accounts of the area for the Western world. Hennepin County's early history is closely linked to the establishment of the cities of Minneapolis and St. Anthony. The history of Hennepin County is cataloged at the Hennepin History Museum, located in Minneapolis.

The highest waterfall on the Mississippi River, the Saint Anthony Falls (discovered by Louis Hennepin) is in Hennepin County next to downtown Minneapolis, but in the 19th century, the falls were converted to a series of dams. Barges and boats now pass through locks to move between the parts of the river above and below the dams. 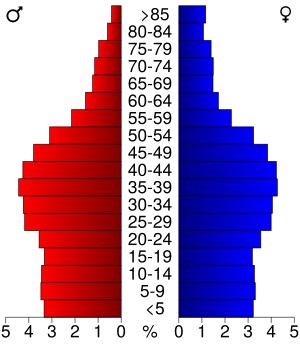 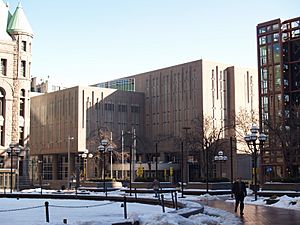 Located across the street from the Government Center, the Hennepin County Public Safety Facility serves as the county jail

Hennepin County is the wealthiest county in Minnesota and one of the 100 highest-income counties in the United States.

All content from Kiddle encyclopedia articles (including the article images and facts) can be freely used under Attribution-ShareAlike license, unless stated otherwise. Cite this article:
Hennepin County, Minnesota Facts for Kids. Kiddle Encyclopedia.