Plymouth is a suburban city in the U.S. state of Minnesota 15 miles (24 km) west of downtown Minneapolis in Hennepin County. Located in the far western suburbs, the city is Minnesota's seventh largest city. According to the 2019 Metropolitan Council estimate, Plymouth's population is 79,768. The population was 70,576 at the 2010 Census. Once named for Medicine Lake, the city's name was chosen by Hennepin County Commissioners during the county's inception.

Plymouth's history can be traced back to the pre-Columbian period around 1400 to 1500 AD. The original inhabitants were the Dakota. Their encampment was at the north end of Medicine Lake. The name Medicine Lake is derived from the Dakota word Mdewakanton, meaning "Lake of the Spirit." The Dakota named the lake after a warrior overturned his canoe and his body was never recovered.

Antoine LeCounte, a guide and explorer, was the first settler to this area. He arrived in 1848, but did not settle until 1852. He carried mail from the Red River country to points south, trading goods to Native Americans for horses on the way. LeCounte built the first cabin at what is now East Medicine Lake Boulevard at 29th Avenue North.

Plymouth's beginning as a town occurred in 1855 on the northwest shores of what is now known as Parkers Lake. A gristmill and other structures were built in the area. In the spring of 1857, when Parkers Lake flooded, the mill was taken down and moved to Freeport. Freeport is now named Wayzata.

As new settlers arrived in the area, they decided to organize. The Hennepin County Board of Commissioners named the new settlement Plymouth. On April 19, 1858, a group of townspeople met at the home of Francis Day to open elections for town offices. On May 11, 1858, the group voted to change the town's name to Medicine Lake. This was used once at the town meeting, but for reasons, which were not recorded, it was never used again.

During the Dakota War of 1862 between white settlers and the Dakota at Fort Ridgely, near New Ulm, the settlers of Plymouth formed a militia. When the Civil War started, Plymouth paid its volunteers $25 to enlist. At about this time, Plymouth's growth began to take on a new look. Schools and churches were built and a post office was located in Plymouth. By 1863, hotels were being built.

More changes occurred after the Civil War. By 1880, Plymouth boasted a population of 1,074, and reaped $667 in annual taxes. Farming became the trade of most settlers. Roads were built across Plymouth, making access to other towns possible. Medicine Lake had become a major tourist attraction and resorts were built around its shores.

As the character of the community evolved, so did local government. Plymouth incorporated as a village on May 18, 1955. The city adopted the Council–Manager form of government on August 1, 1968. Plymouth became a statutory city on February 7, 1974. It remained a statutory city until voters opted to make it a home rule charter city by adopting a City Charter on November 3, 1992. The City Charter went into effect on January 1, 1993. The Charter continued the Council–Manager form of government, and increased the size of the City Council. Before the adoption of the Charter, the City Council was made up of five members elected at-large. The Charter increased the Council to seven members elected from four wards.

Plymouth was named by Money Magazine the number one city in which to live in the United States in 2008. The magazine gave top honors to Plymouth because of its inclusion of residential areas, industry, parks, schools, and other aspects which make Plymouth a self-contained and essentially autonomous city.

Interstate 494, U.S. Highway 169, and Minnesota State Highway 55 are three of the main routes in the city. Plymouth has 863 cul-de-sacs and 300 miles of city streets, which are maintained by the city’s public works crews.

There were 28,663 households, of which 32.4% had children under the age of 18 living with them, 55.6% were married couples living together, 8.5% had a female householder with no husband present, 3.0% had a male householder with no wife present, and 32.9% were non-families. 26.4% of all households were made up of individuals, and 8% had someone living alone who was 65 years of age or older. The average household size was 2.42 and the average family size was 2.96.

According to Plymouth's 2014 Comprehensive Annual Financial Report, the principal employers in the city are: 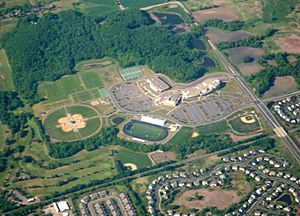 Wayzata High School is operated by the Wayzata School District, has approximately 3500 students in grades 9 to 12 (2011), making it the largest secondary school by enrollment in Minnesota. Projected enrollment for the 2012-2013 School Year is 3617. It is also the largest Minnesota secondary school by structural size, with an interior of 487,000 square feet (45,200 m2). The school is part of the Lake Conference. In 2008, Newsweek ranked the school #940 "List of the 1300 Top High Schools in America."

All content from Kiddle encyclopedia articles (including the article images and facts) can be freely used under Attribution-ShareAlike license, unless stated otherwise. Cite this article:
Plymouth, Minnesota Facts for Kids. Kiddle Encyclopedia.