Wayzata ( wy-ZET-ə) is a city in Hennepin County, Minnesota, United States. It is about 15 miles (24 kilometres) west of Minneapolis on the shores of Lake Minnetonka. Wayzata is known for its small-town character and quaint downtown area along the lake.

As of the 2010 census, the population was 3,688. It is an outer suburb of the Minneapolis–Saint Paul metropolitan area.

The Mdewakanton Dakota, a sub-tribe of the Dakota nation, inhabited the area around Lake Minnetonka beginning around 1700 CE. They treasured the "Big Water" as an endowed hunting and fishing ground and protected the land from the rival Chippewa tribe (also referred to as the Ojibwe). While these natives had been living in the region for hundreds of years prior, the land was claimed by Spain and later France, who sold it to the United States as part of the Louisiana Purchase in 1803. For many years, the nearest Euro-American settlement was Fort Saint Anthony (later renamed Fort Snelling). It wasn't until the 1851 signing of the Treaty of Traverse des Sioux that the lands west of the Mississippi River were opened for land claims to be filed. Tension between the settlers and the natives in the area rose in the 1850s and climaxed during the Dakota War of 1862. After the war, most Dakotas (including the Mdewakanton) were forced to flee the area. Although the Dakota no longer live in the area, their legacy lives on in the name of the city. Waziya was their god of the North, a giant who blew the cold winds from his mouth. With the suffix ta added, the name means "North Shore." The name Wayzata is a Euro-American translation of this phrase.

In 1852, two pioneer families settled on the present site of Wayzata, one of them being the family of Oscar E. Garrison. Garrison built a cabin at what is now the intersection of Lake Street and Broadway Avenue in downtown Wayzata. In 1854 he drew a survey of the area and filed a claim for most of present-day Wayzata proper. Wayzata was officially established later that year.

In 1855, Wayzata had an influx of settlers, who built a sawmill, a hotel and a blacksmith shop. Most of these early settlers made their living in agriculture by clear-cutting the trees to grow corn and wheat. Since the eastern forests had been exhausted of their supply, ginseng root was also in great demand as an aphrodisiac in the Orient. When ginseng was discovered in the hardwood forests near Wayzata, the town became a distribution center for roots collected around the lake. In 1857, however, Wayzata's growing economy was nearly terminated by a locust plague.

Growth was assured to the city when the Saint Paul & Pacific Railroad extended a line to Wayzata from Saint Paul. This inevitably made Wayzata the gateway to Lake Minnetonka. After the Civil War, vacationers from around the world (but particularly the Deep South) began arriving in droves to enjoy the lake's natural beauty and cool climate. With numerous trains scheduled for arrival in Wayzata, hotels were quickly built around the lake. One such hotel, the Maurer House-West Hotel, was built where Garrison's cabin had been. An estimated twenty-thousand vacationers flocked to the area each year, spending entire summers at seventeen hotels scattered around the 125 miles (201 km) of the lake shore. Paddle-wheel steamboats were used to bring visitors from the train station at Wayzata to many of the hotels. The largest of these steamboats, the Belle of Minnetonka, was 300 feet long and could purportedly accommodate up to 2,500 passengers. This era, commonly referred to as Lake Minnetonka's "Glory Years," reached its peak in 1882 when James J. Hill, now owning the Saint Paul & Pacific Railroad (which he had renamed Great Northern Railroad), built the 400-room Hotel Lafayette in Minnetonka Beach, about five miles west of the town.

In 1881 Wayzata broke away from the Minnetonka Township and became a separate governmental entity, mainly as a reaction to the roaring tourist-vacationer lifestyle. The first act of the Village Council was to ban saloons, and the second was to have the railroad tracks moved away from the downtown business district. An 1883 town law required the tracks to be relocated 300 feet (91 m) from the shoreline. Hill, the chairman of the railroad, ignored the law. In 1889, the Council filed a lawsuit forcing the railroad to comply. Hill argued that he had state law on his side and that, if the town continued its lawsuit, he would move the train station nearly a mile east of town. In 1891, the Minnesota Supreme Court denied the legality of the law, and Hill, as promised, moved the station to flat land beneath today's Bushaway Road railroad bridge. The village of Wayzata was literally taken off the map (as the new station was named Holdridge), and for the next fifteen years the town's economy barely grew. In 1905, the village council voted for a reconciliation ordinance, and Hill responded with the construction of a new depot near the business district. 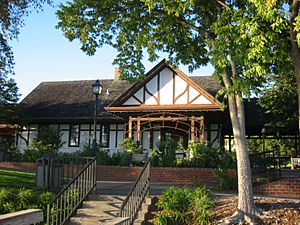 By 1890, the Glory Years of Lake Minnetonka had reached their apex. A nationwide economic depression and the migration of tourists to newer resort areas in the West gradually transformed Wayzata into a residential community. Summer cottages began to appear along the shores of Lake Minnetonka during this time. Some of the largest "cottages" (which were actually full-scale mansions) were constructed in Wayzata in the neighborhood known as Ferndale and along Bushaway Road.

As the cottage era continued, the community of Wayzata became mostly residential, with small commercial centers at each end of Lake Street. By the 1920s, motorboating had become popular, and Wayzata had two nationally renowned boat builders located on the shore of Lake Minnetonka. Weekends brought thousands of spectators to the lake to watch boat races. 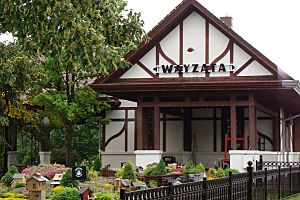 In the 1930s, today's U.S. Route 12 reached Wayzata as a hard-surface road. Realtor Sam Batson subsequently praised the benefits of buying a summer cottage in the area and modifying it for year-round living. Despite the challenges associated with modernizing the infrastructure of a summer village, the population nearly doubled in that decade. Under mayor Rufus Rand, water and sewer service was provided to every building, street lights were installed on the town's newly paved roads, and a public beach and park were opened.

As World War II approached, Wayzata became a city, with locally based jobs and retailers that provided all of a family's needs. The boat-building era was ending, and home building was starting to grow. During the war, wooden eight-man boats built in Wayzata were used by American soldiers to cross Europe's many rivers. Dairy farming became a significant local activity. At the end of the war, many single-family housing units were built on former dairy farms. Highway 12 was widened to four lanes, and the population swelled with commuters who worked in Minneapolis. Downtown residences were replaced by more stores, serving not only Wayzata but also the new families moving to the former farmlands outside the town. Longtime local residents were still the only candidates for public offices, and the need for more schools became a growing concern. The lake continued to draw people for boating, fishing, and other recreational activities. Wayzata became a charter city when people began considering it a suburb of the Minneapolis metropolitan area. 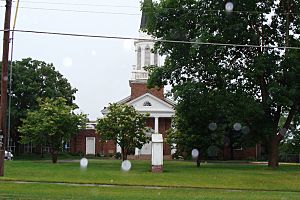 In the 1950s, Wayzata doubled in size when it annexed land from Minnetonka, Plymouth and Orono. Shopping centers, such as the Wayzata Bay Center, were built to meet the daily needs of the residents, while the downtown shops focused on fashion and service businesses.

Wayzata's climate is humid continental, with is hot summers, cold winters and moderate autumns and springs. Average summer temperatures range from 56 to 82 degrees Fahrenheit. Average winter temperatures range from 2 to 27 degrees Fahrenheit. The average amount of rainfall is 30.4 inches, and the average amount of snowfall is 54.4 inches. 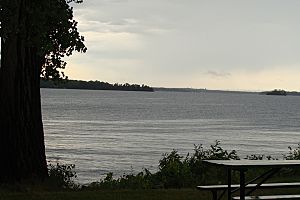 Before it was settled by colonists, the Wayzata area was largely "upland deciduous forest, with small inclusions of wet prairie and lakes." Forest types typical in and around Wayzata have been "maple-basswood forest, oak forest, lowland hardwood forest, and floodplain forest. Non-native forest types within the city were predominantly disturbed second growth forest types made up of elm, box elder, ash, cottonwood, with occasional basswood, maple, and oak." Some of the species of plants that are considered invasive in the Wayzata area are purple loosetrife, narrow-leaf cattail, common buckthorn, leafy spurge, tartarian honeysuckle, garlic mustard, reed canary grass, Siberian elm, and Amur maple. Some rare native species have also been spotted in Wayzata, including the Acadian flycatcher, pugnose shiner, and red-shouldered hawk. 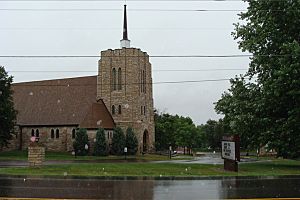 The Dakota Rail Trail is a 13.5-mile-long paved regional trail. In Hennepin County, the trail winds around Lake Minnetonka through Wayzata, Orono, Minnetonka Beach, Spring Park, Mound, Minnetrista and St. Bonifacius. Later, in Carver County, the trail was extended by 12.5 miles to Mayer. The trail is managed by the Three River Park District. The trail is a converted railroad bed formerly owned by Dakota Rail. In 2001, the Hennepin County Regional Railroad Authority (HCRRSA) and Carver and McLeod counties purchased the 44-mile corridor. At a cost of $5.9 million, construction of the trail started in 2009. In June 2009, the city of Mound held the Grand Opening for the trail. The trail offers parking and amenities.

The Wayzata Beach is located in downtown Wayzata on Lake Minnetonka. The beach is open to the public and has permit and non-permit parking. There is a lifeguard on duty from mid-June to mid-August when the temperature is above 65 degrees. The beach features

In the 1990s TV show Beverly Hills, 90210, Brandon Walsh (Jason Priestly) and Brenda Walsh (Shannen Doherty) moved to California from Wayzata. On the show, they both incorrectly pronounce the name of the city, saying "Way-za-da" instead of "Why-zet-ta."

In the 1996 film Fargo, the character played by William H. Macy intends to purchase a parking lot in Wayzata.

Much of the 1999 film Drop Dead Gorgeous (featuring Kirsten Dunst, Kirstie Alley, Denise Richards, and Ellen Barkin) was filmed in Wayzata, including scenes at West Middle School, the Wayzata VFW, and 634 Park Street.

The television show Lost featured a major character named Ben Linus, who had assumed the identity of a Henry Gale from Wayzata, who died sometime after crashing on the mystery island in a hot air balloon. 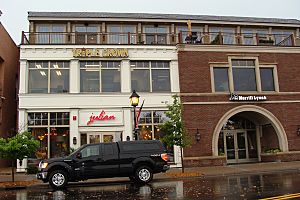 The corporate headquarters of both Cargill and Carlson are in Minnetonka, within 1 mile (1.6 km) of Wayzata. They are two of the largest employers in the Wayzata area.

Northern Oil and Gas, Inc. is headquartered in Wayzata.

The United States Postal Service maintains a post office in Wayzata, which is assigned the ZIP code 55391. Although this ZIP code serves an area much larger than the city of Wayzata and includes seven other municipalities around eastern Lake Minnetonka, all locations in the ZIP code area use the name Wayzata in their postal addresses. 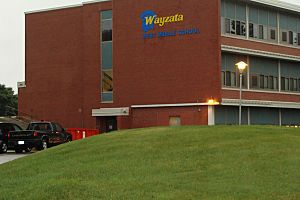 Wayzata Public Schools are part of Independent School District (ISD) 284 and serve all or parts of eight west suburban municipalities (Plymouth, Corcoran, Hamel, Maple Grove, Medicine Lake, Medina, Minnetonka, and Orono). The only school within Wayzata's city limits is West Middle School. The district covers 38 square miles (98 km2), extending north and east from Wayzata Bay on Lake Minnetonka, and lies approximately 8 miles west of Minneapolis. There are approximately 9,510 students enrolled in eight public elementary schools (K–5), three middle schools (6–8), and one high school (9–12). Some students in the area attend public schools in other school districts that their families choose under Minnesota's open enrollment statute. Wayzata is also home to the Highcroft campus of The Blake School (K–5). In 2012, Newsweek ranked Wayzata High School one of the top 1,000 public high schools in the United States.

All content from Kiddle encyclopedia articles (including the article images and facts) can be freely used under Attribution-ShareAlike license, unless stated otherwise. Cite this article:
Wayzata, Minnesota Facts for Kids. Kiddle Encyclopedia.